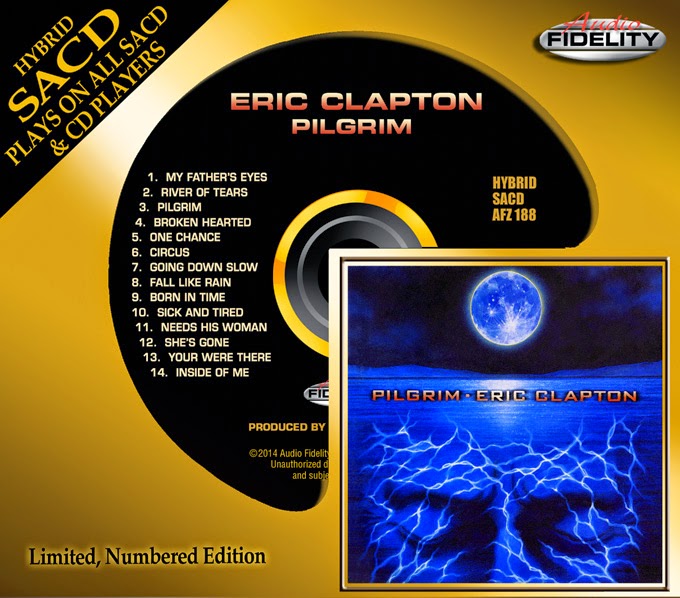 “An Inspiring Masterpiece From The Guitar God - an essential to the Clapton library!”

Camarillo, CA – Adding to the series of Eric Clapton reissues, Marshall Blonstein's Audio Fidelity will be releasing Clapton's 1998 album 'Pilgrim' on Limited Numbered Edition Hybrid SACD! From the song titles “River of Tears,” “Broken Hearted,” “Going Down Slow,” “Sick and Tired” on down, 'Pilgrim' is the musical journal of an artist who has wandered into some dark places and come back the wiser for his troubles. 1998's 'Pilgrim' is the 13th studio album by Eric Clapton, it was his first album of original material since 1989's 'Journeyman' (also recently reissued on Hybrid SACD by Audio Fidelity).

The album is an intriguing musical tableau that experiments with drum machines and synthesized dashes of electronica and an inventive use of strings, performed by the London Session Orchestra, reminiscent of old-school R&B. There is wonderful, graceful guitar work throughout 'Pilgrim', Clapton provides some great hooks and emotional melodies. The best songs on this eloquent album of orchestrated blues meditations express a choked-up grief and despair. The songwriting is the standout feature of this album. Clapton wrote in his autobiography that he wanted to make the “saddest album.” He wrote or co-wrote every song except “Born in Time,” an overlooked Bob Dylan tune, and “Going Down Slow,” a classic blues written by St. Louis Jimmy. In two songs, “My Father's Eyes” and “Circus,” Clapton alludes to the tragic death of his 4-year-old son. The songs are very moving with more complicated melodies and in depth lyrics. Clapton's emphasis is placed on the entire arrangement instead of being built around a jam session.

Eric's voice has never sounded better, his singing is raw and passionate, much of the music is informed by smooth R&B textures. On the album's sizzling title track, he evokes some of the soulful eloquence of the great Curtis Mayfield. Clapton's vocals are among the most convincing of his career. 'Pilgrim' is an atmospheric album whose mood is mostly melancholy. Unbearable loss and yearning are the central themes of 'Pilgrim', and with its heartbeat bass lines, melodic, meditative guitar figures and heartbreaking lyrics, it offers moments of pure beauty.

“...another evolutionary step from an always rebellious and ever-changing artist.”

The album produced multi-platinum sales and appeared on the year-end Top 100 lists of countries all around the world.