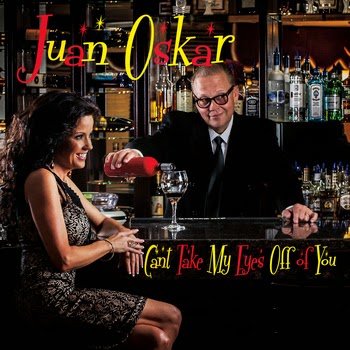 Phoenix, Arizona-July 22, 2014-It has been four years since Juan Oskar has released an album. Stairway to Heavenwas his last installment and now he is back in full swing with Can't Take My Eyes Off of You. And there is no better time than now to release an album with that title since the Jersey Boys movie came out this summer reengaging audiences worldwide with Frankie Valli and the Four Seasons story and music.

Don’t let the title mislead you though, Oskar has offered an eclectic mix of standards. There is something for everyone on Can't Take My Eyes Off of You. The music is a variety of songs sung in English, Spanish, Italian, and Portuguese featuring covers as “Music To Watch Girls By,”  “Quando, Quando, Quando,” “Sabor a Mi,” “Volare,” and “Você Abusou.” All are done very well and Oskar makes everyone his own with his diverse vocal style.

Juan explains - “This is the music your parents and grandparents listened to reminiscent of the old days in a Las Vegas, or of the ‘cool and classy’ cocktail lounge in the big city. Where men would open a door and light a cigarette for a lady. This CD is for the seasoned music lover, a mix of oldies, boleros, lounge, and mob hits. Divertiti!”

Once listeners get their ears tuned in to this classic music they will forget that four years have passed since the last Juan Oskar release. Can't Take My Eyes Off of You is a time machine that takes you on trip around the world while presenting music that everyone understands. For some folks this will bring memories back quickly regardless of what language it is being presented in.

Viva! Juan Oskar! Welcome back to the world of music. It is nice to see that there are artists out there that respect the old classics and are able to translate them in several different languages. There are few vocalists that can accomplish such a feat.

Can't Take My Eyes Off of You is available for purchase on the Juan Oskar website, CD Baby and Amazon. A stream of the entire album can be enjoyed on Oskar’s Bandcamppage. You can also check out where Oskar is performing via the Jazz Near You listings.