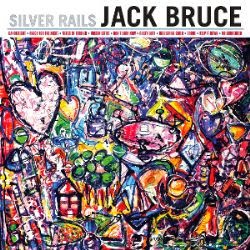 Jack Bruce had not released a solo album in ten years and more recently the man came so close to death that it is was a miracle he survived. We can now enjoy his latest work Silver Rails.
His last solo album was More Jack Than God in 2003, which I had the pleasure of covering and I gave it a 5/5 star rating. 2008’s collaboration with Robin Trower and Gary Husband Seven Moons, was nice return to form however there has been 5 year gap since that release arrived. That space has now been forgotten and filled as we move into a new era for the legendary bass player and vocalist. He is another one of those old rockers that is now 70 and still able to create vital music. Even though I refer to him as a rocker his roots are in blues and jazz and his music always mirrors that but he knows how to make it rock!
A list of guest stars populates this excellent recording. Phil Manzanera, Robin Trower, John Medeski, Cindy Blackman Santana, Bernie Marsden, Uli Jon Roth, Malcolm Bruce and many more. Some lyrics were penned by Cream lyricist Pete Brown, long-term collaborator Kip Hanrahan and Jack's wife Margrit.
This is the kind of album that will grow on you with each listen. Bruce’s voice is so unique and recognized that it seems he is a hands down success no matter what he does, much like his former band mate Mr. Clapton.
“Reach for the Night” is one of my favorites and it clocks in at a hefty 6:19. This is a track that puts on display the complexity and preciseness of a Bruce composition. The musicianship is outstanding as one would expect. Is the track too long or a bit over the top? Absolutely not and the length is just right for what they get accomplished. “Keep It Down” is the bluesy number that old cream fans would crave and it gets the job done in typical Bruce like fashion.
“Hidden Cities” and “Rusty Lady” are standouts as well. The tracks have you travelling down a road of musicality and deeply soulful emotions as all of that reverberates through the music and words. “No Surrender” is the curtain closer and does it ever leave with bang. I would venture to say this is one of the best tracks that Bruce has recorded in a mighty long time. It is the perfect closer and anthem for a man that never gave in or gave up and the very reason he is still here turning us on with his music to this day. It kind of leaves you hanging wondering when the next track is going to start, but alas dear listeners it never happens. You will have to give it another spin and or wait for the next installment of incredible music from the music icon. That is just fine with this music fan.
It’s time to ride the Silver Rails with Jack Bruce and it’s a brilliant trip that you will want to take again, I promise you that.
5/5 Stars
Key Tracks: Reach for the Night, Keep It Down, No Surrender
Tracks:
01.Candlelight
02.Reach for the Night
03.Fields of Forever
04.Hidden Cities
05.Don’t Look Now
06.Rusty Lady
07.Industrial Child
08.Drone
09.Keep it Down
10.No Surrender
Keith “MuzikMan” Hannaleck-Write A Music Review Founder
June 27, 2014
Review Provided By Write A Music
Posted by Keith "MuzikMan" Hannaleck at 6/27/2014