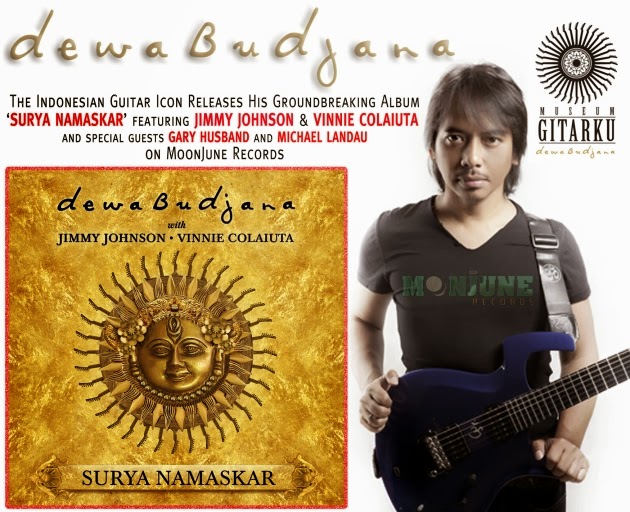 Full of twists and turns you could never see coming, Surya Namaskar provides ample evidence that the Balinese guitarist is just as much at home in moments of pure spontaneity, ripping over a killer groove, as he is in denser, more orchestrated settings. Exploring previously-unrevealed facets of his artistic mystique, this album highlights a more instinctive, uninhibited approach to both his guitar playing and music making. Served up just-out-of-the-oven fresh and delivered with conviction and urgency, each song is its own unique, engulfing cosmic voyage.

The sum total of Surya Namaskar is most definitely greater than its individual – monstrously talented – parts. Together with his two previous MoonJune recordings - Dawai in Paradise (January, 2013) and Joged Kahyangan (October, 2013) - Surya Namaskar paints the ongoing portrait of a guitarist who may be a superstar in the Indonesian pop-rock world as a founding member of the multi-million selling Gigi (one of the most prolific bands in Indonesian history, with 24 releases to their name, celebrating this year their 20th anniversary with their 25th album Live at Abbey Road, in which Budjana is the main composer and author of many hits), but whose lesser-known credibility and, more importantly, visibility as a jazz and fusion guitarist is slowly on the ascendance, as more and more international progressive music fans discover the depth, the heart, and the profound spirituality of Dewa Budjana, at fifty a new guitar hero of strength, creativity and significance.

In January 2014, Dewa Budjana has recorded in New York City material for another studio album to be released by MoonJune, in October 2014, featuring Antonio Sanchez on drums, Ben Williams on upright bass (both recording and touring with Pat Metheny) and Joe Locke on vibraphone.

“Thank you Dewa for inviting us along for your TRIP, your music is from Jupiter, truly unusual!” – Jimmy Johnson

“A monstrously heavy record! Dewa Budjana, at fifty, is a new guitar hero of strength, creativity, and significance." – John Kelman, All About Jazz contributor

“Surya Namaskar, the latest sonic blast from Indonesian guitar master Dewa Budjana, is global in its scope, universal in its appeal … Bolstered by some of the greatest musicians on the planet, Surya Namaskar is one for the record books, – a jazz-rock masterpiece of planetary proportions.” – Will Romano, music journalist and author of 'Mountains Come Out Of The Sky' and 'Big Boss Man: The Life and Music of Bluesman Jimmy Reed'

“Hauntingly beautiful and intense, I was moved. No progressive fusion release got me on its first listen since Pat Metheny Group's 2005 'The Way Up'. Destined to be my 2014 favorite album.” – Tom Gagliardi, Gagliarchives Radio

Dewa Budjana is available for interviews via e-mail and occasionally via Skype.
Physical and digital promos available upon requests.

MUSEUM GITARKU (Guitar Museum, Ubud, Bali, Indonesia)
Conceived by Dewa Budjana.
Located in the idyllic village of Payogan in Ubud, Bali, the original intent behind Museum Gitarku (Guitar Museum) was to store his beloved guitars (a collection of more than 130 guitars). However, in the development of the museum, designed by acclaimed Balinese architect Popo Danes as part of the 100-room 5 star Pakayon Hotel & Resort, Budjana felt that not only could it serve as a testament to his lifelong passion for the instrument, but also as his contribution for the people of Bali and Indonesia that would enable future generations to learn more about the musicians whose playing has graced the guitar over the years. The museum will feature instruments donated by an ever-expanding list of Indonesian and international musicians alike, from local guitar heroes of a country of 250+ million people, such as Chrisye, Rhoma Irama and Eross Candra, to world-renowned virtuosos and guitar legends including Allan Holdsworth, Robbie Krieger, Steve Vai, Michael Angelo Batio. Grand opening is planned for January 2015 with a special appearance by one of the world's best known guitar icons.
For more info: www.museumgitarku.com