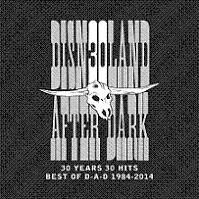 Longevity is something that is noteworthy, especially in the music business where fads come and go and audiences can be fickle. For a band to last for decades is an achievement in itself, but to continue to produce quality music year after year is something else. It is a testament to the bond and dedication between the members and, of course, to their talent as musicians.

Formed in Copenhagen, Denmark in 1984, D-A-D has been producing their brand of rock music for 30 years. Originally known as Disneyland After Dark, they were forced to change their name after being threatened with a lawsuit from the Disney Company. The band consists of Jesper Binzer (vocals, guitar), Stig Pedersen (bass, vocals), Jacob Binzer (guitar), and Laust Sonne (drums). Impressively, they have had only one line-up change in their history together.

30 Years 30 Hits is a two disc compilation album that spans from 1986’s Call of the Wild to 2011’s DIC·NII·LAN·DAFT·ERD·ARK. The selections of songs are just phenomenal.  From the good-naturedly defiance of “I Won’t Cut My Hair” to the catchiness of “Black Crickets” to the head banging “Jihad,” these songs really are the best of the best of D-A-D.  And no collection is complete without the song that brought them into the international spotlight and bringing the type of attention that caused their name change, the infectious “Sleeping My Day Away.”  It is precisely the type of song that will run through your head for days.

From the opening note, “Marlboro Man” is hard rock at its finest.  Its uncompromising attitude, blistering guitar, and roaring drums make for one of the most memorable songs on the album.  Its visceral outro makes for one helluva impression.  This song demands to be played at full volume.  The narrative “Call of the Wild” takes things in a different direction.  The infectious refrain is undeniably pleasing to the ear in this dark tale. The cheekiness of “Point of View” shows of the humorous side of D-A-D’s lyrics and “Reconstructed” finds them at their heaviest.

The second CD opens up just as strong with the rocking “Naked (But Still Strippin’).”  Overall, the second part pretty much matches the first in quality; though there are a few songs I do not much care for, such as the forgettable “Home Alone 4,” sounding too much like any other 90’s soft rock, and the overly sentimental “Soft Dogs.” The bitter sweetness is done better on “Empty Heads” and “Hate to Say I Told You So.” Some of the highlights include “Nineteenhundredandyesterday,” which strikes a nice balance between being emotional and not too sappy, and the energetic, punk sounding “Evil Twin.” D-A-D are at their hard rock best on such songs as “Everything Glows,”  “Scare Yourself,” and “A New Age Moving In.”

You are certainly going to get your money’s worth with D-A-D’s 30 Years 30 Hits.  30 Years 30 Hits is one compilation that is full of hard rock gems.  The timelessness of these songs and the fact that they are just as good as they were years ago, is a true mark of D-A-D’s musical skill. It is a shame that they never broke out bigger internationally, because they have made some great music. Here’s to one of rock’s finest underappreciated bands.
4.5/5 Stars
Key Tracks: Malboro Man, Call of the Wild, Sleeping My Day Away, Naked (But Still Strippin’), Ninteenhunredandyesterday