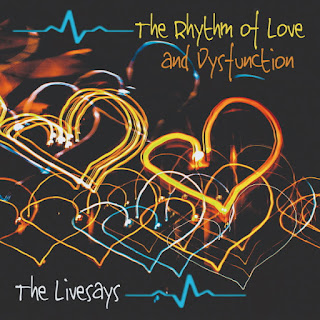 Billy Livesay, best known for his work with E Street Band legend Clarence Clemons as his Guitarist & Vocalist, is releasing a new album with his group The Livesays, independently. The majority of The Livesays' new album “The Rhythm of Love and Dysfunction” was recorded in 2018 and was set to be released early in 2019. Tragically, on November 2nd, 2018, the band experienced unimaginable sorrow when their drummer, Eddie Zyne, passed away from a heart attack. Eddie, who began his illustrious career as the drummer in Hall and Oates, was an original co-founding member and integral part of The Livesays.

Eddie had been so excited about the upcoming release of The Livesays’ fourth album, particularly the new songs which showcased his solid metronome-like drumming style. Losing Eddie was not only a tremendous setback, it caused the band members to cancel all of their upcoming shows and contemplate calling it quits. Instead, the band persevered and, in turn, decided to dedicate this album to their fallen musical brother Eddie Zyne.

Finding a replacement for Eddie would prove to be no easy task as he left tremendous shoes to fill. In the Spring of 2019, along came Howard Goldberg, formerly of the indie funk band “Rudy.” Says Billy Livesay, “Howard knew us from playing around South Florida through the years. He was a tremendous fan of Eddie’s, knew of his passing, and asked if he could audition for us. Much to our surprise and delight, he turned out to be a great fit. He brought a revived energy to our band. We were back up and running in a few months."

The songs were recorded in Billy Livesay's home studio in Pembroke Pines, FL, mixed by Grammy nominated engineer Steve Gordon and mastered by Grammy winning engineer Mike Fuller at Fullersound in Ft Lauderdale. The original plan was to have the song “The Rhythm of Love” be the title cut, and the album was to include songs written and recorded over a two year period after the release of The Livesays' 2016 release “Hold On…Life Is Calling.”

Circumstances changed after losing Eddie. Turmoil set in due to ongoing political unrest, the upcoming election, protests, the Covid-19 pandemic, unemployment, isolation, and having to quarantine. The general feelings of uncertainty and uneasiness, and the ever-changing dysfunctional social and political climate, inspired some fresh new songs and a reevaluation as to which songs to release. Armed with twenty songs, the band narrowed it down to thirteen that reflected a congruent theme, which gave birth to the adjusted title “The Rhythm of Love and Dysfunction.”

Billy explains the meaning and inspiration behind the songs…
“When I Dream” - Everyone has some sort of aspiration; being successful playing music has always been mine. Even when the odds seem stacked against me, I have never given up on my dream. 'It may be a leap of faith but it's a leap I’m going to take, when I dream'. I’d be remiss if I did not mention that I wrote this song while mourning the loss of my bandmate Eddie Zyne who I know would be disappointed if his passing had led to the demise of the band and the end of my dream.

“Another Mile” and “Better Than You” - Many couples are quick to dissolve their relationships after disagreements. I view relationships as a constant work in progress. It’s hard for people to admit when they're wrong. Admittedly, it took me awhile, but I have learned to take the blame when I realize that I am wrong. I wrote the song "Another Mile" for my wife. It was my way of apologizing after an argument over something petty. My wife, Vicki, is also the inspiration behind the song “Better Than You.” She has stood by me and supported me throughout my career. Her mother once said that our “love affair was hanging on by a wing and a prayer.” To this day, I’m glad my wife “took that dare.”

“Can I Have (What You Have)?” -
This song was inspired by a newspaper article I read about a man convicted of armed robbery. In his own defense and to lessen his sentence, he blamed his own reprehensible behavior on having been raised by a father who beat him and a mother who was a drug addict. With pen in hand as I began crafting the lyrics, I happened to look out the window and noticed the sky had turned gray. I wrote down the line “looked out my window storm clouds coming, I don't know how long they will last.” I tasked myself with writing this particular song without a rhyming pattern, which is something that I don’t normally do.
We ended up recording this song at Power Station Studios, in Pompano Beach, FL and released a video of the recording session filmed and edited by Miami-based award winning film maker David Liz. Watch the video here:


“Book Of Rules” - One evening, while at a restaurant eating dinner, I witnessed a group of people acting asinine and causing a ruckus. The line “a jester holding court is something that I ain't” popped into my head and I wrote it down on a napkin. I went home and wrote a “Book of Rules,” a dark rocker with verses that are vignettes about how people seem to have their own codes by which they live.

“That's The Trouble With Love” actually started out as two separate songs. I was working on a song about a guy who experienced love at first sight after offering an umbrella to a girl in the rain, and another song intended to be called “Whole Lot of Trouble,” both of which included lyrics sent to me by a Nashville artist named David Graham with whom I have co-written multiple songs in the past. The concepts were similar in nature in both songs and blended together nicely into one acoustic song which sounds a bit Santana-esque.

“Better Than He Ever Was” is autobiographical in nature, but more so, it's a shout out to my musical peers who, like a fine wine, have improved with age. Too often in the entertainment industry, we are cast aside as we grow older, when in many cases, our maturity lends itself to a better, more polished performance.

“Let It Flow” is a song about addiction, inspired by a close friend’s father who was a train-riding hobo who was always down on his luck as a result of his alcoholism.

“The Rhythm Of Love” is a bluesy dance song about the magic and emotional power of love that sometimes takes control of our senses.

“There’s Something Coming Now” - My drummer and I co-wrote the lyrics to this song, inspired by the current dysfunction of our government, the upcoming election, the country-wide protesting, and overall sense of turmoil we are all feeling during the pandemic. With so much misinformation circulating, we’re all left wondering what’s coming next.

“How Can I Be?” was inspired by a close friend who went through a painful breakup with a domineering woman who cheated on him. It’s a song about love-gone-bad in a dysfunctional relationship that left a man questioning his own self-worth and trying to rediscover himself.

Billy explains why there are two cover songs on this album:
“Woodstock” - When the virus hit and I found myself quarantined, I was reflecting on how I was feeling about the current political state of the country. When the “Black Lives Matter” protests began, it reminded me of the vibe of the 60's movement and the public demand for civil rights and equality. This feeling prompted me to start noodling around with Joni Mitchell’s classic tune “Woodstock.” During a rehearsal, my bandmates and I put our own creative spin on the song. In celebration of the life and legacy of Ms. Mitchell, and because its subject matter fit in nicely with our other songs, we decided to record our version for our album.

“The Heart Of The Matter” - I have been told countless times over the years that my voice was reminiscent of Don Henley. By chance, shortly after Eddie’s passing, while The Livesays were on hiatus, I was asked to fill in for a few months with a touring Eagles tribute band called “The Long Run,” assuming the role of Don Henley. After I finished my stint with the tribute band, we had added Howard to our lineup and began playing out again. The guys in my band decided that we should cover “The Heart Of The Matter,” and it instantly became a fan favorite. It fit the theme of the songs we were compiling for our album, so we decided to record it. Since it has been thirty years since the original release of this monumental song, we opted to stay true to its original composition instead of putting our own spin on it.

Here's what the press has said about The Livesays:

“There is some exceptional music here. The sound of this really channels a lot of old school classic rock textures, but at times brings some modern elements to it. I really like this album a lot. There are no bad songs here at all.” - G. W. Hill Music Street Journal

“The kind of commercial classic rock that doesn’t make hipsters feel self conscious for liking this stuff, the voice, the tunes and the moves all merge into a swell stew of the rock we grew up with and still think is out there. Not only do you get some eloquent melodies on this disc, but you also get some thought- provoking material that will no doubt make an impact on you as a listener.” - Chuck Dauphin, Music News Nashville

“Hold On… Life Is Calling” delivers 13 chewy hunks of pop rock bliss. Without a doubt Billy Livesay has a terrific voice, impassioned and dramatic, and when it coincides with a suitably vast tune, the results are mesmerizing.” — Rocktologist.com

“Melodic rock fans should eat this one up. It’s an enjoyable album from a group of veteran musicians who have been around the block a time or two.” - SeaOfTranquility.org

UPCOMING PLANS-
The Livesays will release “The Heart of the Matter” as a video single on their YouTube channel and their Facebook page with a link in the caption to direct viewers to purchase a digital download of the song with a “name your price” option. Proceeds from the sale of the single will benefit the MusiCares Foundation, a charity that has provided more than $60 million in health, financial, and rehabilitation resources to fellow musicians in times of need. More info on the foundation: https://www.grammy.com/musicares.
The video link is here:

A pre-sale of the CD (signed hard copies and digital downloads) will begin on Monday, Aug. 10th, 2020. The official release date of the CD has been set for Sept 20th, 2020. As soon as it is safe for music halls and concert venues to reopen, The Livesays plan to tour in support of the release of “The Rhythm of Love and Dysfunction.” The band anxiously awaits getting back in front of live audiences where they shine.

In closing, Billy has this message to impart: “During these times of turmoil, isolation, quarantining, anxiety and uncertainty, what has pulled us through is love and music. While we all have our own problems, dysfunctions, shortcomings, and varying opinions, we are all human beings who basically have the same needs and desires. Hopefully the issues we have been facing lately will lead people to take less for granted, apologize quicker, listen more and talk less, smell more roses, and just be better, kinder people. Love may sometimes be ‘a whole lot of trouble,’ but love is definitely worth traveling ‘another mile.’