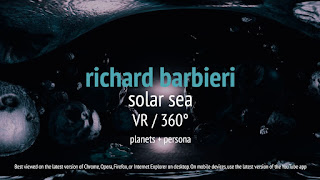 “What other planets are out there? Could there be any life 40 light-years away?” - The new 360° video for Richard Barbieri’s track “Solar Sea”, explores these questions, imagines these new worlds - colliding planets, ice crystals inside a hollow comet, volcanic asteroids spewing molten lava into open space and a breathtaking finale.


360° VIDEO VIEWING INSTRUCTIONS:
To view Richard Barbieri's Solar Sea in 360, you will need to view the video using the latest version of the YouTube app on iOS and Android. By moving your smartphone or tablet, you will be able to look around the 360 degree view. To watch on a desktop or laptop computer, you will need to make sure you are using the latest version of Chrome, Firefox, Internet Explorer or Opera. You will then be able to move the view by clicking and dragging inside the video player or by using the WASD keys. For the most immersive experience, we recommend using a VR headset.

Having seen the “Solar Sea” video for the first time using a VR headset Richard enthusiastically states “THAT WAS INCREDIBLE! It’s amazing that Miles (Skarin) has captured the movement and turbulence of planets, the particles and matter that I was trying to reference in the music. It’s a totally immersive experience and, along with the artwork, another important addition to the album experience”

360° video producer Miles Skarin (www.crystalspotlight.com) explains the development process and techniques behind this stunning visual journey “Following the concept of Solar Sea and drawing on the album artwork, we created dramatic environments which showcase the variety and possibility of distant planets and star systems. We wanted to create visually intricate scenes - large planets colliding, ice crystals spanning across a hollow comet and even a volcanic asteroid spewing molten lava into space. These scenes were created in Maxon's Cinema 4D by building the individual objects required for each scene and placing them in 3D space. To render the scenes, we used Video Copilot's Element 3D, which allowed us to add materials and lighting. We then animated a path for the camera to follow which would become our 360 degree viewpoint. The scenes were set up for 360 VR using Mettle's Skybox plugin. These tools and plugins were all brought together using Adobe After Effects and Premiere Pro, which create a very solid pipeline for 360 VR video production.”

Planets + Persona, the new album from Japan and Porcupine Tree keyboardist, Richard Barbieri, was recorded in London, Italy and Sweden; and is Barbieri's most ambitious, thoroughly engrossing and immersive album to date.  He skilfully utilises the talents of a pan-European core of musicians to produce an album that marries synthesized sounds with organic instrumentation to conjure up vivid, colourful and allusive soundscapes. It’s a skilful commingling of texture and tone, mood and musicality. 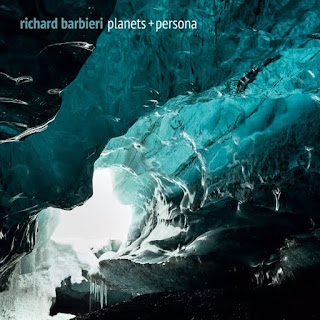 As an ex-founder of the new-wave pioneers Japan, Barbieri was a leader in creating the ground-breaking synthesizer sound that defined the band and influenced the likes of The Human League, Duran Duran, Gary Numan, Talk Talk and a whole raft of artists to follow. Together, the band recorded five studio albums culminating in the groundbreaking Tin Drum, which stayed in the UK Albums Chart for a year.

Following Japan, and a decade of collaborations on his own Medium label, Barbieri joined Steven Wilson's Porcupine Tree, playing keyboards on all the band’s albums since 1993 as well as releasing two striking solo albums: Things Buried and Stranger Inside.

His ear for composing unique soundscapes and synth textures has led to collaboration albums with other talented composers, such as Steve Hogarth (Marillion) Steve Jansen & Mick Karn (Japan) and Tim Bowness (No-Man)

For hi-res image downloads (media use only): http://www.kscopemusic.com/media/richard-barbieri ;