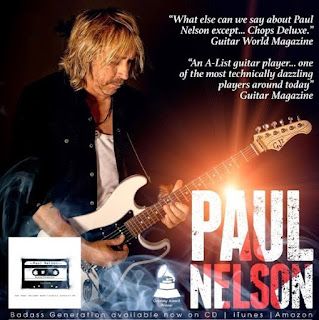 Paul Nelson has been featured in every major guitar magazine and news publication from Guitar World to Rolling Stone and is credited as being a composer/performer for music heard on international and national television broadcasts such as NBC, TNN, UPN, for the WWE. He has conducted his successful “Master Class” Clinics and written guitar columns all over the world.

Paul has had the distinction of appearing as both guitarist and songwriter on Rock/Blues legend Johnny Winter's Grammy-nominated Virgin/EMI release “I'm A Bluesman” as well as producer/performer on his releases “Roots” and the Grammy winning “Step Back” on Megaforce/Sony. He performed as a musical guest with Johnny Winter on the Late Night with David Letterman Show to promote the “Roots” album and on Jimmy Kimmel on ABC TV to promote the “Step Back” CD and Johnny Winter's “Down and Dirty Movie,” which he also appeared in and was the Executive Producer.

Nelson, who studied with Steve Vai in his Berklee days, jazz fusion great Steve Khan and Mike Stern has created a tour de force with his last all-instrumental rock/fusion solo release, “A very diverse package that takes the listener on a sophisticated journey through the musical mind of Paul Nelson. Boundless energy, and displays ferocious solo sections at the same time showing us his control over an emotional side of playing all the while holding it together with a tasteful melodic sense which comes through on each cut.”

“What else can we say about Paul Nelson except - Chops Deluxe.” - Guitar World Magazine

“He's a soulful player who has chops to burn. The word 'ferocious' comes to mind, or 'take no prisoners'” - Vintage Guitar Magazine

“Love this album - the sound and the energy. Gorgeous, searing guitar work. Like a blow torch!” – Wall Street Journal

Recognized as one of music's top guitarist/songwriter/producers Paul Nelson continues his musical journey recording and touring the world over. Nelson was not only guitarist to legendary rock/blues icon Johnny Winter but is recognized in his own right as one of today's premier guitarists. “Johnny definitely took me under his wing,” Nelson remembers his late friend and mentor. “The blues world does that. One musician hands another the torch, and then you run with it. Johnny took pride in turning me on to the likes of Robert Johnson, T-Bone Walker, Muddy Waters Delta, Texas and Chicago blues - all the music that he loved. I knew what he was doing for me, and I am really appreciative of that.”

Nelson performed on and produced “Step Back,” a posthumous, star-studded affair, pairing him on recordings with Eric Clapton, Billy Gibbons, Joe Perry, Ben Harper and many others, earning both Nelson and Winter Grammy Awards for “Best Blues Album” in 2015. Nelson still feels the loss of his friend and mentor. But he also recognizes that new creative endeavors are ahead.

The formation of The Paul Nelson Band and the “Badass Generation” album marked the next step in that evolution. Nelson's new project still maintains an unmistakable connection to the blues, but it also finds the guitarist showing his other musical dimensions, from hard-edged, uncompromising rock and blues to acoustic-driven singer-songwriter fare.

“The Paul Nelson Band rocks. Period. Like the debut albums of Aerosmith or Van Halen, this self-titled debut is hot with licks that are in service to the song. That, right there, puts it a cut above. Nelson's sparkling electricity spills out of his guitar like Blues/Rock on Steroids. Singer Morten Fredheim is a find! Paul Rodgers ain't got nothin' on this guy! Nelson is razor-sharp, crystal-clear and punctuates the proceedings with a kick and a grin. This band can’t help but be huge.” - Goldmine Magazine

On this album Nelson and his newly formed band skillfully incorporate an array of sounds and styles, with what Nelson's fans know to be his calling card: remarkable, world-class virtuosity on the guitar - what you might expect of someone who was also taught by six-string master Steve Vai. “This project has so much input from all of the different styles of music that have influenced me and my band, from blues to classic rock to jam band, pop rock and more. I wanted to play the guitar to serve the songs – and not the other way around. Everything I create has to fit in with the music,” says Nelson.

Nelson's handpicked co-conspirators include vocalist Morten Fredheim, who turned heads topping the European edition of “The Voice”, bassist Christopher Alexander; and Chris Reddan on drums. Gov't Mule keyboardist Danny Louis also makes a cameo appearance. The collective result is something that’s musically rooted in the classic era of Led Zeppelin, Free, Bad Company, Skynyrd, Tom Petty, Allman Brothers, Aerosmith and ZZ Top – but right at home with a fresh new take in the 21st century. “We got together and painstakingly worked out these songs before we recorded them. The caliber of the musicians in this band is inspiring” Nelson explains.

Nelson is eager to begin this new stage of his career with his band mates. Songs such as “Keep It All Together” with Fredheim's soaring vocals, and Nelson's classic guitar sounds to “Goodbye Forever”, with it's infectious groove and chorus and “Please Come Home” displaying emotional melodies and soulful slide guitar work, all which are among the few future stand out classics found on this album. “I want our music to touch many people in the same way it did us in the making and performing of this album,” says Nelson. His only regret? That his old friend wasn't able to sit in on a few of the tunes. “Johnny Winter's influence will always be a part of me,” he says. “There are many times when I pick up my guitar, and I feel his music. I know he's with me in a way, but I also have influences from so many other places. Have I now spread my wings? Absolutely. I'm a musician. I have to keep on writing and performing and never stop.”

The album's title “Badass Generation” says it all! The music on this latest recording speaks to today’s generation's quest for something new and this band's music does just that, through great song writing and musicianship making for one great musical ride! 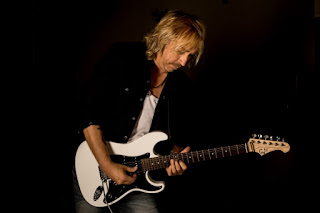