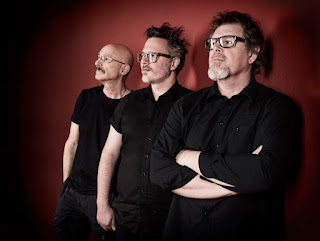 Says Tony Levin, “We're thrilled at the video Ofrin has made for our song 'Prog Noir'. She's an excellent artist in her own right, musical and visual, and made the video on her own, then presented it to us. It's pretty special when you find that your music has inspired others to create something new and special.”


Stick Men is a progressive rock band created by musicians with extensive experience playing together. Pat Mastelotto and Tony Levin are the rhythm section of the legendary band King Crimson. Mastelotto is in demand all over the world as the premier drummer for progressive rock. Levin plays in Crimson, with Peter Gabriel, and has recorded with John Lennon, David Bowie, Pink Floyd and others. Markus Reuter is a renowned composer/guitarist who designed and plays his own unique touch style guitar.

Tony Levin and Pat Mastelotto, the powerhouse bass and drums of the group King Crimson for more than 2 decades, bring that tradition to all their playing. Levin plays the Chapman Stick, from which the band takes it’s name. Having bass and guitar strings, the Chapman Stick functions at times like two instruments. Markus Reuter plays his 8-string touch guitar – again covering much more ground than a guitar or a bass. And Mastelotto’s drumming encompasses not just the acoustic kit, but a unique electronic setup too, allowing him to add loops, samples, percussion, and more.

The result; audiences are fascinated by watching just three musicians onstage perform their unique compositions as well as wild improvisations and some cover versions of songs by King Crimson, Mike Oldfield, etc.

Here's what the press have said about “Prog Noir”:

“ 'Prog Noir' would not sound out of place heard next to any number of post-1980 Fripp-Crimson LPs with its oddly angled tuneful melodies and slightly askew yet utterly coherent rhythms.” - David Luhrssen, Shepherd Express

“In short, if you buy this album you will have in hand something very original, satisfying and great sound quality. A must for fans of King Crimson and minutes of pleasure for others.” - Profil Prog

“The music is complex and full of strange and unusual sounds all the while still maintaining a toe-tapping approachability. It's a fun disc to listen to. In summation fans of these guys may be a little surprised at just how likable these tunes are, but if you are new to this trio, 'Prog Noir' is the perfect place to start your investigation of these remarkable musicians.” - Jerry Lucky

“ 'Prog Noir' is by far the most well-crafted and accessible set of songs Stick Men have written thus far. The fact it manages to be so without sacrificing the members' astonishing musicianship or penchant for syncopation and odd rhythms is a success in and of itself.” - Cameron Piko, Echoes and Dust

“ 'Prog Noir' is an exciting album, in which there is to discover a lot of details. Food for stomach, heart and brain alike, as have the three actually surpassed by stick-point again themselves.” - Thomas Kohlruß, Babyblaue-Seiten

“Sinister, Out-of-the-blue time changes, and peculiar rhythms that will keep you guessing until the very end, Stick Men's new album is like as I've mentioned a film score straight out of a Mystery/Horror film with a strange plot twist. If you love the sounds of King Crimson, Peter Gabriel, David Bowie, and Igor Stravinsky, I recommend 'Prog Noir'.” - Zachary Nathanson Blogspot

LIMITED EDITION COMBO PACKAGE DELUXE BOX SET (2LP/2CD/POSTER)
The combo package includes:
• 2LP 180 grams gatefold (the LP has a, 11 minute bonus tracks on the
Side B of the second LP, which is not included in the regular CD
package)
• 2CD special edition of the new album, Digipack. (Disk One is the
regular 10 track album. Disk Two contains 8 bonus tracks.)
• Full color poster of the album artwork (17x22 inches)