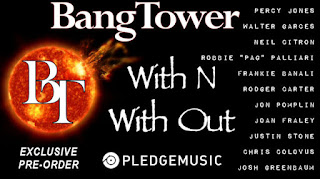 Chicago/Los Angeles – Declassified Records announced today the newest album from progressive fusion legends “BangTower” entitled “With N With Out”, is now available for official Pre-Order from PledgeMusic. The highly anticipated 13 track sophomore album, due for retail release December 6, marks the first full length CD since the internationally acclaimed 2010 debut "Casting Shadows”. The link to the Pre-Order campaign can be found at
www.pledgemusic.com/Bangtower

Exclusives available only from the Pre-Order campaign include rare and unique autographed items, limited edition merchandise, fan interaction opportunities, ability to have their name on the CD liner notes, immediate digital downloads, early shipment of the record, plus regular updates and more.

BangTower was intended to bring together musicians and friends from different genres, disciplines and physical locations, by using a combination of leading edge digital technology along with traditional studio recording. The result from this expanded circle of talent from all over the country is another unique musical document of creative exploration. Blending multi-platinum record sellers, Grammy winners, session artists and music legends along with music teachers and students working together towards the goal of creating the most joyous and interesting music possible.

The tracks on “With N With Out” have a unique personality that reflects and challenges each player’s technique and style, pushing the edge of their musical “comfort zone” while remaining a true joy to play and listen to. Although every composition is an exceptional stand-alone masterpiece, each song remains an integral part of the overall context and feel of the album and the project.

The special limited edition CD version of the new record “With N With Out” will also contain a bonus “holiday track” featuring Percy Jones, Walter Garces and Neil Citron, which was originally recorded in 2013 but never officially released until now.

The new BangTower record “With N With Out” is Produced, Engineered and Mixed by Neil Citron. Released by Declassified Records; Jon Pomplin Executive Producer.