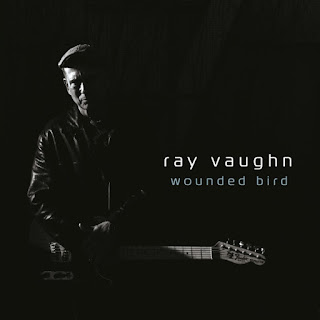 San Francisco – The newest album from San Francisco-based rocker Ray Vaughn may be called Wounded Bird, but he’s really more like a phoenix rising from the ashes of a forgotten San Francisco music scene. Wounded Bird picks up where his last solo album left off, and now Ray Vaughn’s songs have grown from the more stripped down singer/songwriter arrangements of Way Down Low to full-band productions. Ray’s new album will be released worldwide both physically and digitally on November 4, 2016, through his own independent record label, Rayoso Music.

Ray Vaughn founded the punk/art rock band Hostages in 1979, and later the avant-garde Die Bossa Nova in 1984, leaving his mark on the then-thriving SF music scene, until disappearing from the public eye in 1992. Now over 20 years later, Ray has returned as someone tempered by time and experience--with many new stories to tell. He has found a niche for his music on both college and community radio, and in press and media outlets in the USA and across Europe.

Ray Vaughn’s presence has never gone unnoticed. Before founding Hostages, he spent six years in England--first in London and later in Birmingham--soaking up the in-your-face punk rock ethos of the late 1970s, until his ultimate return to his native San Francisco. In the early ‘80s, BAM Magazine described Ray’s lead vocals while performing with Hostages as “powerful and crisp,” adding that “he sang with deliberate emphasis on the lyrics, which were decidedly political… moving onstage much like a Jellyfish with rhythmic jerks and a smooth underlying sexuality in his vocal tones and in his eyes.”

A personal exploration of a life hard-lived, Ray’s debut solo album Way Down Low brings forth echoes of his punk rock past while looking forward to the world he’s yet to encounter. A review of the album on Critical Jazz reported, “if that singer / songwriter vibe is what you dig, Ray Vaughn is easily the best kept secret in music today” and a review by AJ Garcia on Shakefire noted that “the album just reads like a well thought out book of shorts from someone who’s not only lived, but understood their plight every step of the way”.

Now, just three years later, Ray is back to his old prolific tricks with the release of his second full-length solo album, Wounded Bird. Both producer Michael Rosen and Ed Rawlings returned to the project, and new additions include James DePrato (Chuck Prophet) on electric, slide and acoustic guitars, baritone guitar, dobro and mandolin, Kevin T White (Chuck Prophet) on bass, and Prairie Prince (The Tubes, Todd Rundgren) on drums. A response to and extension of Way Down Low, Ray Vaughn’s new album Wounded Bird features eight powerful tracks that leave the audience in a cathartic and contemplative state—wondering, “where has he been for all these years?”

Wounded Bird releases worldwide on November 4, 2016. Ray will be traveling in the UK in late September and early October 2016, before returning to perform a few shows with his band in and around the Bay Area before the end of the year, while gearing up for larger scale touring in 2017 and beyond.

For Music Samples, or to pre-order Wounded Bird or order Way Down Low, please visit: https://rayvaughn.bandcamp.com/