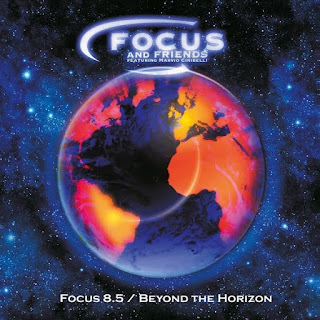 London, UK - Dutch music legends Focus are known around the world for their iconic albums, including the hits HOCUS POCUS, SYLVIA and HOUSE OF THE KING. After the reunion of Focus and the release of the Focus 8 album, the band toured the world and was introduced to new musical styles and influences. The line-up on this album features THIJS VAN LEER, PIERRE VAN DER LINDEN, BOBBY JACOBS and JAN DUMÉE.

The sessions for the album were all recorded in between South American tour commitments during 2005, and every track is a previously unreleased composition by the members of Focus or producer MARVIO CIRIBELLI.

Thijs van Leer said of the album: “For Focus it was a thrill to first jam with Marvio and Marcio in a club in Niteroi and then end up in Rio de Janeiro in order to compose and record these beauties. Having one of the best drummers in Europe with Pierre van der Linden and one of South America’s best drummers with Marcio Bahia on the same album makes the world a better and happier place! Here they are!”

The album features all-star Brazilian musicians including ARTHUR MAIA and MARIO SEVE joining Focus on new recordings, and vice versa, plus a drum duet with MARCIO BAHIA…as musicianship once again goes Beyond the Horizon…