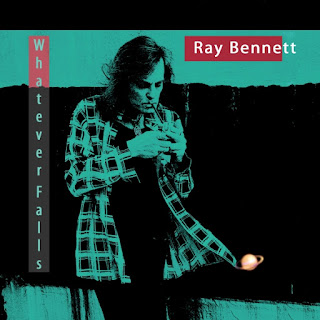 Las Vegas - British progressive rock pioneer, Ray Bennett of Flash, is reissuing his 2001 solo epic “Whatever Falls” for the first time as a digital release, available now on iTunes, and in most digital stores worldwide for purchase and streaming!

With it's original release just days after the Twin Towers fell on 9/11, the hauntingly beautiful title track, “Whatever Falls” was, by eerie coincidence, appropriate and especially moving. But every track of this extraordinary work is an adventure into the innovative mind of an artist who helped define the progressive genre of rock.

Hailing from Sevenoaks, Kent, in S.E. England, Bennett formed his first band, THE BREED, at fourteen with future YES drummer, Bill Bruford. At 21, he and original YES guitarist Peter Banks formed FLASH (EMI/Capitol). This fast and furious, flashy 70's band was much acclaimed, but short-lived. They toured worldwide and recorded three albums with a hit single “Small Beginnings” reaching #28 in the USA. (FLASH is currently available on the UK Esoteric label.) After numerous reissues of their music over the years, FLASH reformed with Bennett, now on lead guitar, and original vocalist Colin Carter. In 2013, forty years since the last FLASH album, “Flash-Featuring Ray Bennett & Colin Carter” was released on Cleopatra Records.

Describing his solo effort, “Whatever Falls” today, Ray says: “As it was my first solo record I wanted it to be something special. I had taken so long to get around to it I felt sure it would get some serious scrutiny, so, coming from me, with my background, it had to be something worthy of my previous output. A flop wouldn't do. An 'Ok' album wouldn't do either…

“An album is for all time and intended for repeated listening. Each new listen should be the same pleasurable discovery. Some of my favourite albums are like that and I wanted mine to be too. I feel I succeeded.”

What rock journalists said in 2001:

“Ray Bennett has released what is very close to a masterpiece with this album.  The disc seems to take common elements of progressive rock both old (Genesis, Yes, Pink Floyd) and new (Spock's Beard, modern King Crimson) and blend them with other elements to create a sound that is both modern and unique.” - Gary Hill, Music Street Journal

“Going solo at this point in his career an artist can be either boring or outrageous. Luckily, with Ray Bennett, it's the latter - today only a few play progressive music as frighteningly intense and haunting.” - Dmitry Epstein, LET IT ROCK

“A mix of atmospheric guitar-based rock instrumentals and songs that feature Bennett's vocals, the skilfully recorded 'Whatever Falls' clearly falls into the progressive rock genre and is essential listening for those who enjoyed those fabulous Flash albums from the early '70s.” - Robert Silverstein, 20th Century Guitar Magazine