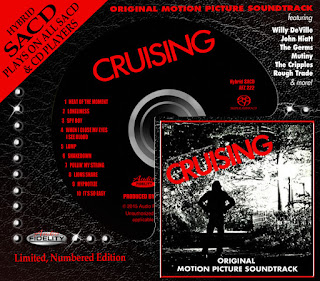 “One of the rockingest movies ever...the music here is dark, dirty and seedy.”

Camarillo, CA - Marshall Blonstein's Audio Fidelity will be releasing the original motion picture soundtrack to Cruising, the 1980 William Friedkin film starring Al Pacino. The controversial movie has become an underground cult classic and the release of the dynamic soundtrack featuring performances by Willy DeVille, John Hiatt, Rough Trade, The Cripples, Mutiny and their left field opus “Lump,” The Germs and others has been long-awaited.

The film, considered a snapshot of pre-AIDS gay life, is about a series of violent New York murders in which the victims all frequent clandestine Manhattan leather bars in which gay men gather to dance, drink, do drugs and make pairings while enveloped in an S&M world of leather, boots, whips and chains. When Friedkin announced plans to set a movie in that milieu, and to film it primarily on location, the New York gay community rose up in protest. Cruising, they said, would present a distorted view of gay life. Upon the film's release gay activists had public protests against the film. However, critical opinion of it has warmed over the years as the film has been reassessed and the demand for the music continued to grow.

One of the best parts of the film is the amazingly gritty soundtrack. The music was scored and compiled by the late Jack Nitzsche, one of the most prolific film orchestrators in Hollywood during that period. Nitzsche was best known for being Phil Spector's arranger (and shared credit as the co-creator of “The Wall of Sound”). He won an Academy Award for Best Song for co-writing with Will Jennings and Buffy Sainte-Marie “Up Where We Belong” from 1982's An Officer and a Gentleman. Jack also worked with Neil Young on “Harvest” and was a keyboard player on many mid-1960s albums by The Rolling Stones.

Friedkin and Nitzsche had collaborated earlier on The Exorcist. Among many film successes he composed the unusual score for One Flew Over the Cuckoo's Nest. Nitzsche can currently be seen at work in the studio in The Wrecking Crew documentary making rounds on movie theater and cable TV screens.

Most of the songs on the Cruising soundtrack are a mix of rock, glam and disco music. The tracks are much more violent and full of an anxious energy. The tracks complement the action and the S&M bar setting extremely well and offer a glimpse of an un-idealized 70's scene. It is not the flourishing, feverish, disco epics that have come to stereotype gay musical tastes though there is some serious dance floor stomping here as well as several raw and spirited tracks by various punk, P.Funk, rock, pop and soul artists.

Nitzsche was excited about working with the proto punk Germs as well as Willy DeVille and as a result of this record went on to produce some of their best material including three Willy DeVille albums beginning in the late 1970s: Cabretta (1977), Return to Magenta (1978), and Coup de Grâce (1981). Nitzsche said that DeVille was the best singer he had ever worked with and that talent is on display in this original motion picture soundtrack.

Every leather-styled package includes a 12-page booklet with complete credits and dramatic photo stills from the movie.

First time ever available on CD!

For more information: www.audiofidelity.net
Posted by Glass Onyon PR at 10/14/2015