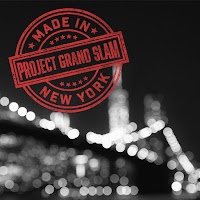 There is nothing like a good jazz album to give you a renewed appreciation for the art and fascination that music can bring. With that thought Project Grand Slam seems to always come through for me.

Their new release Made In New York is a diverse outing giving the listener a good look at all the facets of their talent in one recording. If you like jazz with or without vocals it is all here on this one album and some live cuts to close the curtain and sweeten the pot as well.

“New York City Groove (Instrumental)” illustrates the broad strokes this band can paint on the musical canvas. The opening track is the vocal version featuring Kat Robichaud and the closer being the instrumental. PGS makes sure that their audience gets the best of what they have to offer and it is not illustrated any better than on that particular track.

“Fire,” a Jimi Hendrix classic for the ages, is transformed (see the steamy video provided with Kat on vocals) and was also featured on the Rate The Tracks site for your streaming pleasure. There are some listeners that will think otherwise I am sure but the band puts it all together and makes the track their own. Putting your own stamp on a time tested classic is not an easy task. This is why I believe this band has the talent and range to do just about anything.

“Boston Common” is a superb instrumental jazz track; it just does not get much better. This is modern jazz that takes the foundation laid down by the forefathers of the genre and cranks up the heat to take it all to another level. It reminds me of why I was spell bound by this music when I first discovered it.

Made In New York is not only a testament to the great talent in the band, it is a tribute to jazz that all music lovers will find an appreciation for. Music like this has soul, character and culture all wrapped up into one tight package that is hard to resist.