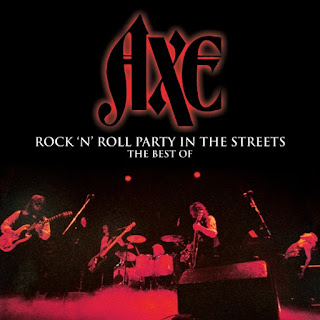 Los Angeles - Much to the excitement of rock fans worldwide, Deadline Music will be releasing a 2CD blockbuster career retrospective from one of the unsung heroes of classic hard rock who toured with every major metal act from Iron Maiden to KISS to Mötley Crüe, the indomitable AXE! The anthology includes the band's biggest hit single “Rock 'n' Roll Party In The Streets,” plus select cuts from the much sought after first 2 studio albums and much more!

AXE was formed in 1978 from the ashes of a band called Babyface and began recording their first album, “AXE” in 1979 and started a tour that lasted until 1984. Their second album, “Living On The Edge”, followed in 1980. In 1981, AXE changed labels and recorded “Offering” for ATCO Atlantic featuring the hit “Rock and Roll Party In the Streets.” The song reached #59 on the Billboard charts of the most-played-songs in 1982, and became a nationwide rock anthem. After 19 months of touring with the likes of Ozzy Osbourne, Judas Priest, the Scorpions, ZZ Top and Motley Crue, it was time to record the fourth AXE album - “Nemesis”. Continued success meant more touring. Band leader Bobby Barth was seriously injured in a car crash that led to the disbanding AXE and later joining Blackfoot. After his stint with Blackfoot, Barth took his talents to Australia to join Angry Anderson (Rose Tattoo), hitting the Top 5 on the Australian charts.

The reformed 1997 AXE line up featured former Frank Zappa vocalist Bob Harris, Bobby Barth on guitars, Edgar Riley Jr on keyboards and original drummer Teddy Mueller plus bassist Blake Eberhard, and keyboardist Rob Lowe. To his credit, Bob Harris has performed with some of the greatest artists in the music industry. Covering vocals and keys for Frank Zappa, he proved his ability as an outstanding musician and writer. Blake Eberhard is one of Colorado's premier studio and live bassists. He joined AXE after being hired by Barth for several recording sessions, and added a new dimension to the AXE sound. In the interim period between the band's split and the reformation, Edgar Riley Jr had worked with Frank Zappa and had also played with several unidentified bands in the Southern states of America and Teddy Mueller had got involved in the publishing industry.

“AXE has been one of the greatest musical and personal adventures in my life. However, it was always bitter sweet, because the tragic death of Michael Osborne created the space that I later filled. I will always be thankful to my friend Mark Pinske for introducing me to Bobby Barth. From the start he (Bobby) mentored me into the band's style and graciously included me in the writing process, and became one of my dearest friends for life. AXE has always been about the music - not the hype - and I feel honored to be a part of it.” - Bob Harris

A brand new AXE album, “AXE (Twenty Years From Home)” was released in September 1997 featuring re-recorded versions of choice tracks from each of the first four AXE albums, plus two from the recently released V record. For their 2001 album “The Crown” the group inducted new personnel guitarist Danny Masters and drummer Christian Teele. AXE would release a limited edition mini album “Live In America 1981” to commemorate their European 2001 tour dates. In the mid-2000's, AXE reformed again including singer Bob Harris and adding new members, Brad Banhagel, David Landes. The band toured throughout the US and Europe.

Now AXE fans worldwide are rejoicing with the pending release of AXE's “Rock 'n' Roll Party In The Streets – The Best Of”!