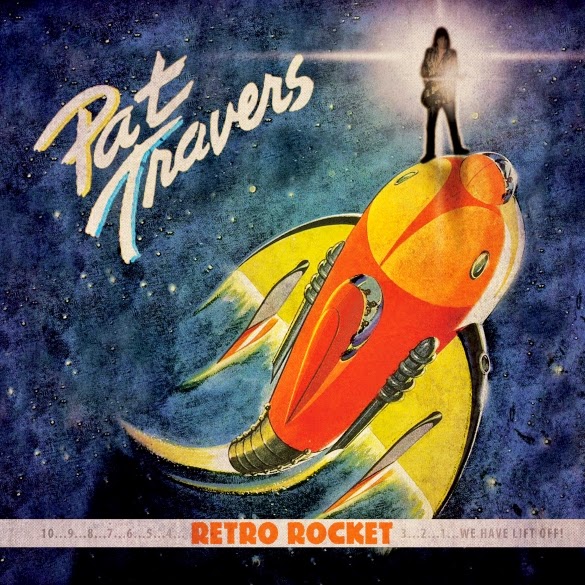 Los Angeles, CA - Even after three and half decades of smoking hot guitar licks, powerful vocal performances, and just plain kick ass, foot stomping rock & roll, legendary guitar slinger Pat Travers is still firing on all boosters! Fresh off the Rock Legends Cruise in February, Travers takes the helm of another ship with Retro Rocket, a powerful new album of studio recordings to be released by Purple Pyramid Records on March 17. Then, he’ll hit the road again with his superb band playing shows across the U.S. throughout March and April.

As its name suggests, Retro Rocket finds Travers digging deep into the early years of his outstanding career, finding inspiration in the fiery grooves of 1978’s Heat In The Street and, of course, his monumental 1979 live album Go For What You Know. The lead off track, “I Always Run,” kicks things into high gear with a multi-layered, guitar chugging hard rock thumper that shows this veteran rocker isn’t about to slow his pace. And even when things do slow down, like the first half of the gospel-tinged “Who Can You Turn To,” it turns out to be mere build up to a massive climax of shredding solos, monster drum fills, and all out frenzied rock ecstasy. Travers’ voice shines throughout the album, seeming to only get better, more raw, more passionate with age; must be all that cocaine drinkin’ and whiskey snortin’! When you’ve had a career as long and as rich as Travers, to be releasing an album with this much energy and passion is quite a feat indeed, and hard rock fans young and old should not miss this ride of a lifetime!

After releasing a trio of releases hailed as some of the slickest and hottest guitar-rock albums ever - the aforementioned classics of ’78 & ’79 plus the 1980 blockbuster Crash And Burn - Canadian-born Pat Travers would go on to deliver classy melodic rock throughout the ‘80s, followed by a blues period in the ‘90s, and into the new millennium with several unique projects both solo and band efforts. Cited by Metallica’s Kirk Hammett as one of his favorite guitarist, the Travers legend and influence extends beyond the barriers of time, place, or genre. His live shows continue to impress, deftly balancing old favorites with fresh new material. Retro Rocket carries on Travers’ proud tradition of seriously passionate musical prowess mixed with pure, unadulterated fun!