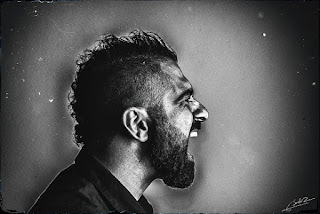 Following the release of his fiery and ballsy singles 'Would You' and ‘Burnin’, Bull Funk Zoois on a parade and ready to take the rock industry by storm. Raw and uncompromising, ‘Dangerous Radio’ is BFZ's blindfolded rollercoaster ride of rock, funk, blues, sex and the news, all the while tipping his hat to masters like Jimi Hendrix, Chilli Peppers, Range Against The Machine, Clutch, Frank Zappa and the Sex Pistols.
While previous collaborations featured Eslam Jawad -M.C (former Gorillaz and Wu Tan Clan) and Hamdan Al-Abri,  ‘Dangerous Radio’ sees Assaad Lakkis a.k.a. Bull Funk Zoo performing and producing the whole album himself. Assaad describes ‘Dangerous Radio’ as a big bad bull rocking out, fornicating & wildly stompin' the blues to rubble. Hendrix havin' a drink with Tom Waits & RATM decided to tear it up.
Listen to Whiskey taken from the album: https://soundcloud.com/bullfunkzoo/bull-funk-zoo-whiskey
Bull Funk Zoo’s debut album was recorded in 2013 and got the highest ratings for an unsigned band’s record by Rolling Stone. In the Middle East, he has made a name for himself, playing in front of up to 30,000 people at concerts, supporting the likes of Sting, Sade, Timbaland and others. Bull Funk Zoo is continuously working on new material, videos and other creative endeavours. He says: "Creativity is my drug of choice, it has got me in a vice.”
Assaad was born in Dubai after his parents had to escape the devastating war in Lebanon in the 70s. As a young boy, music always played a big role at home, which had Assaad growing up to the sounds of James Brown and various Motown artists. When he first saw Kiss performing on TV, the energy of rock’n’roll both intrigued and scared him. Enchanted by the magic of it all, he soon discovered bands like Soundgarden, Megadeth, Stevie Ray Vaughn and Jeff Beck, broadening his musical horizons and leading him to constantly crave new experiences.
At the age of 17, he moved to the US for a few years to attend university, and dig further into unknown musical realms. During this time, he also discovered punk rock and jazz, which soon lead him to realise that the mentality of these genres fitted in perfectly with his own worldview.  Both in music and life, Assaad is a free spirit who is willing to cross boundaries in order to expand his mind. He surrounded himself with like-minded people such as the spoken word artist Eric Bailey and Glen Burris, a well-known horn player who played and recorded with Miles Davison “Man With The Horn”.
“Bull Funk is the ideal description of the music; it's got attitude, heart, grace, and it’s in-your-face. The Zoo is the Bull Funk collective, hence Bull Funk Zoo.”
Dangerous Radio is out September 12th
Links:
Stream: https://soundcloud.com/bullfunkzoo
Donate/Buy: https://bullfunkzoo.bandcamp.com
Watch: https://www.youtube.com/user/BullFunkZoo
Tweet: www.twitter.com/bullfunkzoo
Like: www.facebook.com/bullfunkzoo
Web: www.bullfunkzoo.com
Watch The New Promo Here
Posted by Keith "MuzikMan" Hannaleck at 9/02/2016 No comments: