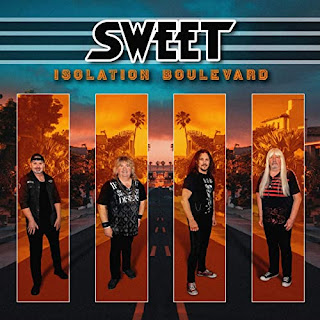 If you venture through the ‘80s there’s no telling the endless possibilities of pop, rock, and other music stylings that will take hold of your ear and have you looking like Tom Cruise in Risky Business. The Sweet (then morphed into Sweet)  burst onto the scene from London, England in 1968 but, officially became a recognizable and formidable contender in the music world in 1974 with the release of Desolation Boulevard. Much of that initial record has now been revived into a newly mastered album closely aligned in the title as Isolation Boulevard. It’s the band’s walk down memory lane, combined with their introduction to new, upcoming, rock connoisseurs.

Starting off Isolation Boulevard is the band’s first and most notable hit “Fox On the Run.” The song’s catchy chorus gives the listener a burst of excitement as they chant back at or with the band, especially when performing live. This is the type of song that sticks in your brain for days once you’ve heard it for the first time. “Still Got the Rock” follows as a new song to add to the band’s repertoire. The Sweet is back with vengeance to proclaim they still got the power and the rock that they garnered over the course of their near 50-year career. Meanwhile, “Action” sounds like a track you’d hear during a climax/post-climax or event-type of a scene in a movie or cartoon (i.e. – the chase scenes between the “monster” and the Mystery Inc. gang on Scooby-Doo). Nevertheless, it remains a cool bridge track.

Continuing with “Love Is Like Oxygen,” the song gives off an anthem-like theme, it isn’t too overpowered, and it gives off a more mellow vibe while keeping the listener with build-up and dips of excitement through the song. “Hellraiser” ignites a fire once again as the song clearly hints. With synthesizer effects, thrashing guitar strings, and somewhat storytelling tonality to the song; the song is like the last anticipated second before the fuse lights the dynamite followed by its explosion.

“The Six Teens” is a lyrical mind-game, yet it’s interesting tale of young love gone wrong has a certain appeal to it as well. “Blockbuster” is a secret-to-revelation, mystery track. Much like “Action,” it gives off a film scene imagery. “Set Me Free” is a wild and dark, tongue-in-cheek song that is an enticing song of how loathsome a pairing can become. Yet, all the while, the emotions are high and aggressive as can be almost as if it’s love-to-hate gameplay.

The song “Teenage Rampage” track is a rebellion song if ever there was one to be written. “Come and join the revolution. Get yourself a constitution. And join the revolution now. And recognize your age, it’s a teenage rampage.” This is all about how a clash of the ages and ‘the way it’s been’ vs. ‘change’ is perceived and played out. It also shows that history does, in fact, repeat itself. “Turn It Down” slides in with a jam session that will just keep cranking it up instead as the band moves through the song. The last two tracks offer nothing but pure excitement. “New York Groove” may attract some of the younger viewership with a familiar part of the track being off of Alicia Key’s “Empire State of Mind Pt. 2.” And lastly, if you’ve never lent your ears to “Ballroom Blitz,” then you just don’t know rock and roll. “Ballroom Blitz” is one of those songs that will forever go down in rock history as a frenzy-driven song that is just pure adrenaline.

Sweet remaster all of these hits to capture their best moments once again. The band, while having their share of rotations through the years in members and labels, along with epically tragic events like losing key members like Brian Connolly, Mick Tucker, and Steve Priest; seem to still rise above and come out on top. Though they may feel like they are in a sort of isolation with such loss. The big gain Isolation Boulevard pulls off for them is that of memories, thrill, and a sort of rebirth of the band.