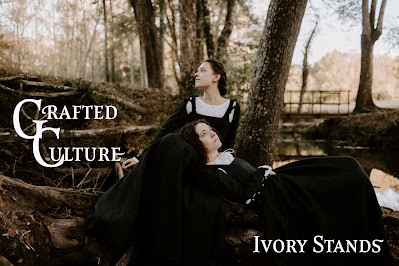 Dutch/American sisters Gabriëlle and Michaëlle, aka the minds behind phenomenal outfit Grafted Culture unveil striking new release titled ‘Ivory Stands’. Creating gentle folk music poised with poetic lyricism that stir the emotions, the duo are known for their incredible harmonies. What adds even more to their music is their amazingly humble and gentle natures that find joy in sharing their passion for life with others. The two sisters grew up travelling and experiencing different cultures and countries, and by doing this, led the siblings to find their music calling.

Speaking about the iconic new release, Grafted Culture share, “Ivory Stands is about turning your back to the history that formed and shaped you, and using that history to strengthen your journey to a new life of empowerment.”

Prompting reflection as perseverance, ‘Ivory Stands’ is a truly inspiring release that comes across as entirely innovative. Grafted Culture’s unique sound is influenced by the constant struggle with love and loss as they fall in love with the culture and people of a region and are forced to say goodbye as they are called to move on. The sisters were raised to be aware of the needs of others and to be a positive addition to their surroundings. They have camped in the remote jungle villages of Papua New Guinea, been on the streets of Sydney, Australia at 5AM feeding the homeless, walked through hospitals Christmas Caroling for the sick and volunteered at LeBonheur Children’s Hospital