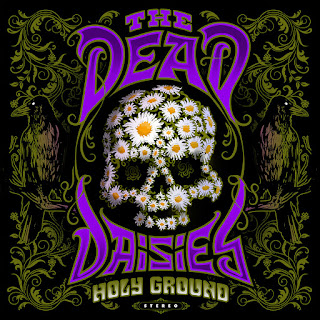 The Dead Daisies hold so much street credit both past and present since their breakout in 2012, the revolving door keeps spinning with great music throughout. The current line-up: Dough Aldrich (Whitesnake/Dio), Deen Castronovo (Journey), Glenn Hughes (Deep Purple), and David Lowry (Red Phoenix) came together to offer us, Holy Ground coming from rock legends. Some prior members included: John Corabi (Motley Crue), Darryl Jones (The Rolling Stones), and John Tempesta (The Cult/Rob Zombie). As you can see, the band is a collage of rock and roll greatness.

Listening to Holy Ground, it feels like real music has found its way back to the airwaves and speakers. Having this band rise over the years means not only, that there are people that still crave the realness of music and true musicianship, but more than just machinery and auto-tuned pop or techno beats. The strength and power behind Hughes’ vocals represent just what love and dedication to a musician’s life can showcase grand results.

The album itself is a pure adrenaline rush. The intro and also title track “Holy Ground (Shake the Memory)” is an earthquake of head-banging thrill. Fittingly, “Like No Other (Bassline)” is very much focused on the bass. “Come Alive, “Bustle and Flow,” (one of the main focal tracks), and “My Fate” are all songs that maintain a battle and struggle theme or anthem throughout. The way the album is set up, “Bustle and Flow” is one of the breaks in the album where there is a bit more levity and a slight pop sound to attract a wide audience rather than them sticking to one set group of people. It sets up this back and forth between a darker or more serious tonality like “My Fate” and “Come Alive” and a pure foot-stomping, sing-along-styled “Bustle and Flow” and “Chosen and Justified.” The single “Chosen and Justified” follows as a strong continuation of the prior three tracks, yet this packs a powerful punch to keep the momentum going.

There are cracks within “Saving Grace” but, in a good manner of speaking. The cracks are where the singer proclaims that his other half is the symbol for everything that frees him of the chains that bind him to the world. Not to mention, a guitar solo finds its way to blend into the message of the song to entice the listener to more. “Unspoken” feels like it belongs inside an action movie during a battle scene. Then to follow, “30 Days in the Hole” harkens right back to that ‘80s hair-band feel. It’s the most ‘fun’ track on the whole record, as far as radio-friendly (pop-rock) is concerned. But, songs like this, “Righteous” find hints of Guns N’ Roses blasting through.

While “Far Away” ends the album on a more melancholy note, the concept of calling out to someone during the chorus is exciting on its own; enough to not have it be your typical last track lead-out song. However, taking a look after this album is complete, Holy Ground certainly has the listener feeling like they are reliving the glory days of rock n’ roll once again. Truth be told, I had never heard of The Dead Daises up until this point, and thought very much so, that they would be a Grateful Dead Tribute band. Oh boy, was I in for a much-welcomed surprise. Thankfully, after hearing The Dead Daises the first time around, I cannot wait to go back and listen to their other four records that are bound to send me or any listener on yet another time warp.