Rock-Blues Review: Steve Cropper-Fire It Up 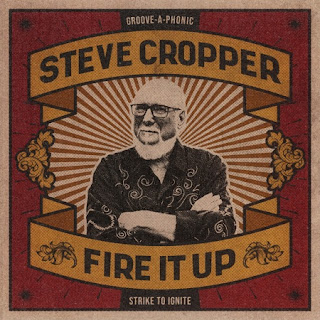 If you have any familiarity with Booker T. and the MG’s or all the music coming out of the legendary Stax label, then you know the name, Steve Cropper. All that music I have always appreciated and the craft of Cropper on the six-string leading the way. You won’t hear his name mentioned amongst the greats such as Clapton, Beck, and of course Hendrix. My thought is that he was recognized in his genre and all his contributions to countless recordings including his solo recordings. He played at a very high level and continues to do so as the new release Fire It Up will attest. He is right up there on the list with the big boys as far as I am concerned.

Fire It Up features Cropper at his level best with Nioshi Jackson (drums), Roger C. Reale (vocals), and Jon Tiven (bass, sax, keys, harmonica, background vocals, with shared production duties with Cropper). Some other names contributed that you will recognize as well are Felix Cavaliere, Anton Fig, Simon Kirke, the list is extensive. All of that fine talent coming together to lend a hand gives Fire It Up some flow and cohesiveness that adds to the spark of that amazing guitar playing on display from start to finish.

There are thirteen cuts on the album. After listening to all of them I felt as though there was nothing that seemed out of sync or so different that it stood out as the one track that would be left in the can for future consideration. This is quality rock and blues with a strong underpinning of soul that comes through the vocals nicely.

I think the versatility that Cropper offers on this release is exceptional. “Bush Hog, Pt. 1” is a snappy instrumental to kick things off. The title track is a funky bluesy burner with Reale on vocals to complete the song. As things move along you hear will so many of those sweet crisp licks from Cropper. My favorite amongst many was “Heartbreak Street” and “She’s So Fine,” which sounded like a good choice for a single release to create a buzz about the album.

Cropper is 79 years young and he still has that fire burning in his belly. He floats like a butterfly and stings like a bee (thanks for that line Muhammad Ali) on this recording. The band he pulled together to support him certainly does Fire It Up at every turn making this a classic offering that stands as one of the best releases I have heard this year.