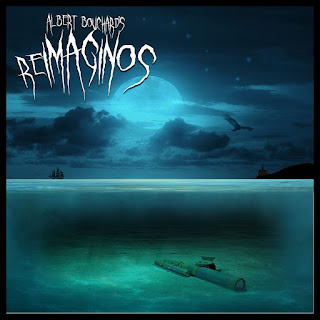 Get ready for an adventure of a lifetime. Frontman Albert Bouchard for the legendary rock band Blue Oyster Cult returns to the spotlight on his own to share a record of his solo ventures. Re Imaginos puts to work an element of the band combined with original soothing guitar riffs and piano melodies that provide a unique twist on the Blue Oyster Cult sound but, allow Bouchard to shine on his own. This comes as Albert and his brother Joe Bouchard, release the record through his new imprint label, RockHeart Records / Deko Entertainment. The album is Albert’s reimagining of the 1988 Blue Öyster Cult release, Imaginos, which was originally intended as Albert’s solo album.

Re Imaginos starts with the alluring and outright obvious signaling of “I Am the One You Warned Me Of.” The song’s initial lead-in gets the listener in a head-bobbing, rhythmic good mood. That is, even if the song is hinting that the person is hinting at a hidden agenda or personality that was previously unsuspected. “Del Rio Song” is the main song that harkens back to the former Blue Oyster Cult classic sound. The song mirrors the sound of the classic “Burning for You,” sending the listener into a frenzy of nostalgia and enjoyment of the cool, smoothness of the track overall.

We venture into more melodramatic territory on “In the Presence of Another World.” The song avails to the strong piano-structured intro, into a powerful but constant guitar pattern that is borderline repetitious as it moves forward. While the sound is calming and enjoyable, it does begin to seem prolonged and invariable, once the mid-point second verse concludes. Venturing forward, track four, is a curious track that gives off a storybook, fable-themed sound. From the title of the track to the frequent religious references, it acts as a wonderful mystical piece for the listener to get lost within.

The wild-wild-west comes through upon “Girl That Love Made Blind.” As Bouchard recounts of a far-off, distant memory of Christmas, the girl is the center of the holiday season where he danced his heart away that night. As this soft, light song plays out, the reminiscence of him longing for that same companionship further on. The following number, “Astronomy,” makes the midpoint of the record and a re-recording of Blue Oyster Cult’s single on the Secret Treaties album. It is an illustrative tale of the wonders of space mixed with a wish of one last venture with this girl Susie who is on her way to starting her life on her own, married and complete.

The title track “Imaginos” is a continuation of Bouchard’s mysticism. The themes of ever changing life and decay, as well as, nomadic-like movement are are ways of imagining the touch-and-go-sense of nature and the human world. “Gil Blanco County,” tells of this wondrous place that nature is vast and there is a sense of openness that the typical city-life does not contain. “Blue Oyster Cult” is a funky jam tune to pay homage to the group that made Bouchard the musical phenomenon he is today. “The Oyster boys are swimming now,” make it sound as though there is this revival in the work of sorts, of which listeners can interpret to their pleasure. This is followed by a powerful guitar riff which blasts the song and audience into a midpoint rock n’ roll frenzy.

Closing out the album, “Black Telescope” is a grand wordplay trickery song. As though a sailor is making up a voyager’s song, it tells of the many ways and types of visions differing creatures may take up the sight of their world around them. “Magna of Illusion” is a tale of what could be an event in a time of victorian-era happenings. Whether it be of travel and discovery, or a battle to come, the tune ends with revealing that not all is what it seems; leaving the listener in awe. Finally, “Les Invisibles” is a medieval song that sings of a setup and celebration is put on in this particular story that looks as though, the death of an individual is celebrated.

Key Tracks: “I Am the One You Warned Me Of,” “Girl That Love Made Blind,” “Blue Oyster Cult,” “Black Telescope”

Track Listing:
01. I Am the One You Warned Me Of
02. Del Rio Song
03. In the Presence of Another World
04. Siege and Investiture of Baron Von Frankenstein’s Castle at Weisseria
05. Girl That Love Blind
06. Astronomy
07. Imaginos
08. Gil Blanco County
09. Blue Oyster Cult
10. Black Telescope
11. Magna of Illusion
12. Les Invisibles