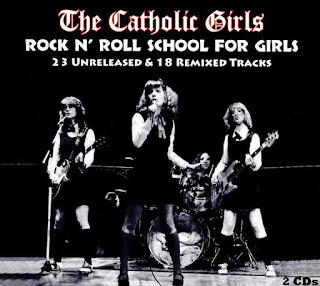 Hailing from my home state of New Jersey, The Catholic Girls burst onto the rock n’ roll scene in the early ‘80s. Causing all kinds of controversy and uproar in their music, the group never really gained national momentum. However, they were able to garner enough attention along the coast and turn heads. Even the catholic church within Rhode Island decided to ban them from performing at several functions. Rock n’ Roll School For Girls finds root in the modern era that could prepare this band for an epic revitalization of their lifetime.

The Catholic Girls pack a wild punch in this remastered collection of provocative hits. They return more than 15 years later from their last release, to reintroduce themselves to the masses that the world was possibly not ready for. In a not-so-politically-correct, modern world; the band may have more success amongst varying age groups who align with angst-like, rebellion rock. On this two-disc album, essentially many of the songs represent a topic to which is breaking stereotype concepts or causing mayhem.

The consistent theme throughout the album is front-woman Gail Petersen’s distinct style. She makes her mark by emoting her voice in such a manner that gives off much of the same mystique as Stevie Nicks. Starting off the album, disc one is loaded with demo records that made their way into the group’s mainstay discography. Then, disc 2 offers a slew of remixed editions of the prior disc. Both track listings also incorporate a number of new music singles.

See, this band knows how to play up satirical themes, from the threat of schooling that plagued the singer’s home life growing up, to failed relationships and just being flat out wild and reckless. Songs like
“Grounded” and “Grand Theft Auto” are two examples of the bombastic flare that play through much of the first set of the tracklisting. As both of the discs play through, the latter half of the music, a more solemn tone is felt within the album. Emotions rise on tracks such as, “You Let Me Down” and “Should’ve Been Mine” offers a difference in mellow manners. One song is more powerful and utilizes Petersen’s vocal style to her advantage while the latter is a more lyrically somber and plainer sound that shows less is indeed more.

Showcasing their broad discography, this album acts as a reintroduction to a three decade’s worth of bad timing but, amazing talent. These girls know how to mix the flare of rock n’ roll with humor and contradiction to the normal ways of thinking on a particular subject. It seems that traveling through time, forty years down the line just might have its advantages when it comes to The Catholic Girls re-emergence.

Key tracks include: “Grounded,” “Grand Theft Auto,” “God Made You for Me,” and “Down At the Shore.”