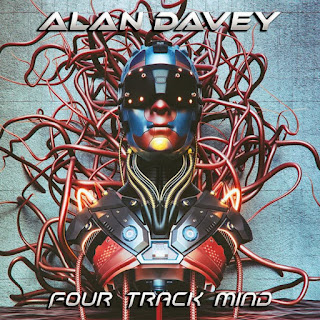 You may not believe your eyes at how gigantic this piece of work might be, but, it won’t take long to tell you of this powerful album. Take a trip. That’s exactly how you’ll feel after listening to Four Track Mind. It’s interstellar, out-of-this-world. You might recognize this badass bassist and guitarist from his Hawkwind days. For 12 years from ’84 to ’96 and then again from 2000 to 2007, he rode high on his band’s success. In the space of that four-year hiatus, Davey took the time to mold his own career as a solo artist. During his second run of Hawkwind, his solo projects diminished. With this new solo release, it’s almost as if he had one final trick up his sleeve…that we know of.

Four Track Mind is not for the average, every-day music lover and or consumer, (even some aficionados might find some difficulty in getting through this heavy tracklist). The album lures the listener into a trance-like state. Alan Davey shows a great variance of techniques in utilizing a blend between two instruments – a bass guitar, and a synthesizer. As you play through the album, it begins to feel like a movie soundtrack from an alien domination film. The tone intensifies as tracks like “Lost in the Smoke” and “Greenback Massacre” come on, where the beginning 10 tracks and others like “Fire Tribe” are play-on beatmakers that play almost like individualized ringtones to old-fashioned cell phones.

Imagine, if you will, a hypnotical spiral where it continues to infinity. That is what much of this album represents. Four Track Mind is the kind of album you need to allow yourself to get lost in. Dedicate a day of meditation or intention to this record. The varying sounds and tones through the combination of the guitar and synths send you through an out-of-body experience like no other. But a piece of work of this magnitude also requires the discipline to go from start to finish and understand how to make essentially four separate albums cohesively flow together.