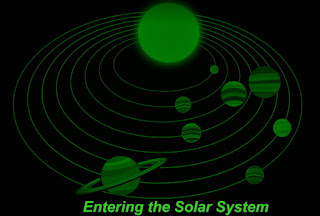 9 Songs For The 9 Planets Of The Solar System and One track featuring original sounds from Mars!
Athens, Greece - Experimental musician and author Billy Yfantis, releases the Sci-Fi/Space album entitled “Entering the Solar System”. The album features 9 instrumental tracks composed for the 9 planets of the Solar System, plus 1 track called “Landing” consisting of re-worked sounds that were originally recorded on the planet of Mars by NASA. The album was composed and recorded in Athens, Greece by Billy Yfantis who used a mix of virtual instruments and field recordings. Each track represents the sonic aesthetic perception of each planet while “Landing” is the re-editing of sounds created by InSight's robotic arm as its camera scanned the surface of Mars.

The Solar System was formed 4.6 billion years ago from the collapse of an enormous interstellar cloud. The majority of the system's mass consists of the Sun along with the other 8 planets: Mercury, Venus, Earth, Mars, Jupiter, Saturn, Uranus, and Neptune. The whole scientific concept was a major influence for Billy Yfantis who is deep into Science since he is an active researcher of the University of West Attica. Billy commented on the new release: “Although my Ph.D. research is on a different field, Astronomy and Space have always been my passion. I believe that it was time to explore Space musically through the path of the virtual music technology.”

Billy is already working on the creation of several promotional videos to visualize the Sci-Fi experience of the new album. In the meantime, check out a promotional video for the older track “Floating in Space” (The Noisy Whispers Compilation album) that was recently posted on YouTube:


The new album features Space music with songs that vary from Film Music, Ambient, to Krautrock. The only way to understand the spirit of the album and visualize this interstellar exploration is to follow the instructions:
Grab your headphones!
Relax!
Tune in!
Enjoy an out of Space experience!

Krautrock legend Harald Grosskopf (Ash Ra Tempel, Klaus Schulze, Cosmic Jokers): “I always like electronic music made by younger musicians who consequently follow their personal instinct, rather than trying to copy what’s already been made in the past, in the spirit of: Whenever you meet Buddha kill him. Keep on tracking Billy!”