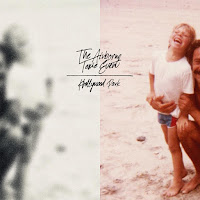 Being a sucker for what I'll coin as Literary Rock, I eagerly anticipated this latest Airborne Toxic Event release, Hollywood Park. The album is a soundtrack to founder Mikel Jollett's recently released memoir focusing on his experiences growing up in an infamous cult and subjected to a childhood filled with poverty, addiction, and emotional abuse. If the book is as powerful as the soundtrack, we're in for a great read.

It's worth noting that the band takes its name from a 1985 postmodern novel called White Noise, which centers around a chemical spill that forces the citizens to face their mortality and learn to appreciate the beauty of the natural world around them.

The sonic experience involves a back-and-forth between propulsive anthems and subtle, evocative piano ballads. "Come on Out" is one of the album's real treasures. With a driving rhythm and deep, resonant vocals, it captures the thrill and angst of youth, all the while steering the listener boldly toward a new future.

As the album progresses, the songs slowly become stripped of their production and presumption. They become more personal. "The Common Touch" features Jollett in a folksy singsong number, which feels as if he's about to lighten the mood and then heads in a different direction.

With our heads soaked up in alcohol, one hand on a cigarette. I swear I still got some good moves left. I've been fifty-eight since I was twenty-three. I got sixty-nine problems but one ain't me.

In addition to "Come on Out," the standout track to me is "All These Engagements." The lyrics are rife with veiled allusions of deep and dark childhood trauma, which has followed the protagonist has carried with him all his life. It starts slow as a remembrance and rolls along forcefully building toward an ultimate crescendo of rage. "Common Touch" adds a folksy singalong number to the equation to lighten the mood.

All in all, The longing, anger, and regret are palpable on Hollywood Park. Yet after a close listen, one feels a sense of earned wisdom, a that which does not kill me makes me stronger feeling. What Airborne Toxic Event delivers is a powerful collection of songs that blends rock music with a well-told coming of age story. The result is a highly gratifying listening experience.