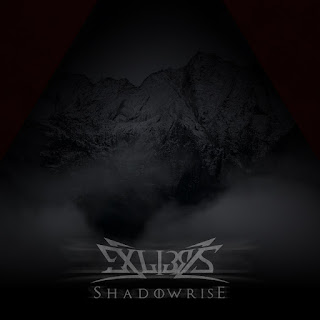 Crank up your radio or stereo and let er’ rip with Shadowrise! The band Exlibris unleashes its latest, six-track album with a blend of rage and power, combined with a melodic body of work; all of which accelerates the band through a momentous round of music.

Coming high off their critically acclaimed album Aftereal, the band leaves no stone unturned in letting rip all efforts fly on their fourth studio album. With the intense vocals of Riku Turunen mixed into the instrumental stylings of keyboardist - Piotr Sikora, bassist – Piotr Torbicz, and drummer Grzegorz “Gregor” Olejnik; a rebirth of heavy metal, or “Hi-octane metal,” or “speed metal”, has also been referenced...is born. One would assume, four albums in, a band starts to either sound repetitive or lose its fundamental uniqueness of sound. Exlibris keeps it polished and the volume past 11 as the album unfolds.

Right out of the gate, “Rule #1” transforms from an intense set up as a trick of a possible light hunter’s battle-themed tune, to then quickly evolving into an intense battle royale. Its powerful guitar-shredding clashing with the main theme of the lyrics to produce a dramatic introductory track proves to energize the listener and excite them for what is to come. As the song continues, it plateaus and slightly builds to heighten the dramatic effect of enticing the listener, only to leave them wanting more with the singer repeating a partial chorus.

“Hell or High Water” intensifies the continuation of the record. It is the fighter anthem, with the strong intensity of the guitar, this song is all about building up and getting stronger with each note that passes on. It connects well also to the beginning of “All I Never Know.” “All I Never Know” starts with great force and then lends itself to mellow out for a good half of a minute in the middle. This is only to follow it through with another short burst of energy, keeping the listener on their toes, and unwinds by mellowing out with the keyboards.

Another instance of a song flowing right into another is that of the title track “Shadowrise.” The song blends the keyboard fadeout in the very beginning and then bursts right into power and might “looking for a sanctuary.” This might imply that everything that lies within the shadows might be in danger or that the shadows may be the danger themselves. Whatever the case may be, it is a clever appeal to combine a lyrical image with the speed and sound of the song at hand.

“Megiddo” comes in with a bang. Rightfully so, aside from Riku’s vocals, this song is 85 percent dedicated to the work and craft of Grzegorz “Gregor” Olejnik. Without him, much of this record, and this song would fail to carry itself as the drum beats are what it is built upon. The speed, the rhythm, and the control of the song carry out only because of Grzegorz.

The final track “Interstellar” is intriguing. Much of the track is spoken word of a speech formerly given by President John F. Kennedy in 1962. Anyone born after the early 1990s or, even some just before then, might not even know of this infamous speech proclaiming the great desire of traveling to the moon and through space. It is a great tease in history. Never close your mind to where music could lead you even in secrecy.