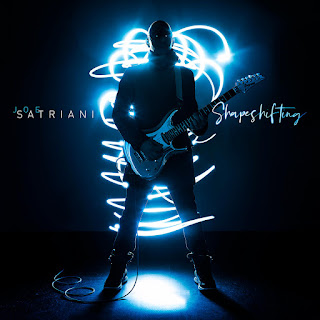 I always wonder what Satch will come up with next when he releases another album. You have to be a very creative guitar player to constantly come up with something new and exciting for your listeners. He manages to do that consistently. With Shapeshifting due out on April 10, 2020 he is sure not to disappoint.

There are thirteen tracks of instrumental ear candy to consume on this latest recording. Joe’s sound is distinct and very familiar to millions of rockers worldwide. I am among the longtime fans that stretch back to the 80s. When I was first turned on to his music, I could not forget it and wanted more. Joe has served us instrumental rock freaks well in his long and successful career.

Some notes from the press release FYI: Shapeshifting was co-produced by Satriani and Jim Scott (Foo Fighters, Red Hot Chili Peppers, Tom Petty & The Heartbreakers) with longtime associate John Cuniberti onboard handling the mastering duties. Satriani enlisted a wide range of collaborators, both old and new, to help him bring the songs to life. Legendary drummer Kenny Aronoff (John Fogerty), bassist Chris Chaney (Jane’s Addiction) and keyboardist Eric Caudieux were the core musicians on the new album with additional contributions coming from Lisa Coleman (The Revolution) and Christopher Guest.

So, there is no surprise that so many names in the industry are part of this. Just remember he is the guy that taught Steve Vai a few things, who is no slouch on the six-string either.

The production values of Shapeshifting are superb and what you would expect. Every song has a different style and pace to it, making sure every listener gets the variety they need to stay interested from beginning to end. Joe delivers the goods track to track. The album leads off with the title track and a high energy blast of some guitar magic that sets the right tone right from the start.

One of the more eclectic and interesting tracks is “Ali Farka, Dick Dale, an Alien and Me.” It gives thanks to those artists that Joe has admired and you certainly can hear the Dick Dale reference. Surf instrumental is so recognizable and Dale was one of the first innovators of the genre. I am not familiar with Farka’s work but because of that song I will have to do some investigating. If Joe likes him, chances are his work will be of great value to his listeners. As far as the Alien, I think it was that silver dude he was surfing with back in the early years of his career.

The first single “Nineteen Eighty” has some Eddie Van Halen types of riffs running through and it packs a punch through to the end, it is pure energy and excitement. After that explosion of six-string virtuosity, Joe slows things down a bit with “All My Friends Are Here.” It’s not slow but in terms of the way he plays, it is a few notches down from the previous track. It has some great hooks that are hard to ignore. It sounds like the kind of track you may hear sound bites of accompanying a sporting video, albeit in a sport that has plenty of movement.

All that energy and creativeness Joe has in his soul never subsides during this instrumental treasure trove of masterful six-string displays. This is vintage Satriani doing what he does best, just flat out jamming and bending those strings with a fluidness and command that few players can muster. He is and has been one of the premier rock guitarists for a long time and this recording takes its place alongside one of the great releases such as Surfing With The Alien for consistency of quality. I must reiterate, with the level of difficulty involved in putting out yet another all-instrumental album, this sets the bar extremely high for an artist like Joe. He is up for the challenge and plays like a man that is recording his swan song.

Diversity is the key to success. Tracks like the beautiful “Falling Stars” step away from the hard-charging rockers to show that he can do tasteful slower paced tracks with some funky licks interspersed between the rhythm section action. “Waiting” is even more expressive and a nice ballad that relates to the title with its slow start and pensive build-up that intimates some impatience but in a very nice way. It is one of the shorter jaunts clocking in at 2:37. Now if that wasn’t enough of a change, he kicks into high gear with some reggae chops on “Here The Blue River.” He also mixes in the rockin’ side of his playing to the blend with the reggae back beat which continues as the foundation. The multi-layered tracking is amazing with some great effects, making the track the most varied sounding on the entire album.

And just when you thought you heard just about every style imaginable he closes out with “Yesterday’s Yesterday,” a country-fried journey that rings true with the jangling strings and the old western atmosphere it hints at. In many ways, if you played this for long time fans, they may be hard-pressed to peg Joe as the artist.

In the end, the curtain closes and Joe Satriani wins you over again with the superior quality and all the incredible guitar playing on display on this fine album. His ongoing maturity is evident with each subsequent release and he surely is the ultimate Shapeshifting guitar man.