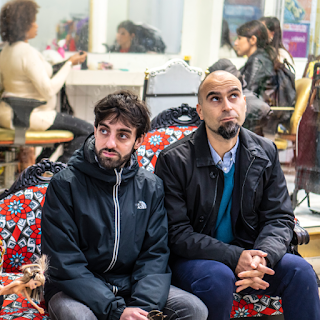 Italian music artists EMILIANO DEFERRARI & MARCO MACHERA are releasing their debut self-titled album of free-form improvisation on November 15, 2019. Long-time musical friends, Emiliano and Marco had never worked together, but always liked each other's music, and attended each other's performances. Emiliano's band Nanaue used to cover one of Marco's great tunes “The Ugly Song.” Throughout the years, the two musicians discovered very similar taste in music, from no-wave jazz, to art rock and more non-conventional styles. So, when Marco moved to Brussels from Italy, it felt quite natural to do something together. They could have started writing songs, but eventually they preferred to start with “something completely different”.

Emiliano explains, “They call it non-idiomatic free improvisation. We don’t agree 100% with the definition, it’s a philosophical quarrel, but that is what we do. We are both improvisers, inspired by free-form music and wanted to perform together this way. The album is documenting an excerpt from two recording sessions on cold mornings in March and May 2019 in Brussels, at Monty Studio. Two condenser microphones in the room plus a dynamic one pointed on a twin reverb, to capture the sound of us on prepared acoustic and jazz guitars, baglama, violin and objects found in the studio. No overdubs, no post-production, a rough mixing and a transparent pre-mastering. The beauty of the moment without pre-ordered languages to fit into, not against but beyond rules.”


“We took a walk through Matonge, the Congolese neighbourhood of Brussels, and had fun mixing (us Italians), with those picturesque African vibes on a cold northern European afternoon, last October. That’s the joy of living in an open city like Brussels.” 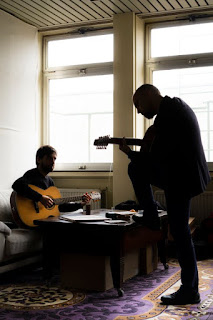 Marco says, “We have decided to release this material outside of any self-indulgent snobbery, we just decided to give something to the listeners so they could satisfy their possible curiosity. We liked the atmosphere we created, the interplay and the amount of chance which helped the development of those four improvisations. We are eager to perform live and have fun with our audience. You may also consider this album as ‘another side of us’. In fact, for instance, we realize now that we didn't sing during the sessions, even though both of us are frontmen. We were so focused on creating the momentum that we forgot rules, roles and habits.”

From Brussels the duo will start presenting the album and performing live on November 30th at seeU, the ephemeral neighbourhood at the old 'Casernes d'Ixelles'.”

Emiliano was born in Genoa, Italy, in 1977. He started playing guitar at 6 and recording his own music at 11. He played and sang jazz, rock and world music with different bands in Italy. In 2005, after settling in Rome, he produced his first solo album “SO_LO” with Rattsburg Records, with good reviews. Since then he started touring Italy with his solo show with guitar, voice and effects. Between 2007/2011, Emiliano toured as The Loop Duo with Adriano Arena, with guitars, voices and live loops, producing an album (THE LOOP DUO/BMA and Rattsburg, 2009). In 2009/2010, he produced a new EP (O.S.T./Rattsburg, 2009) and LP “LIGHT EARS” (Rattsburg 2010). Since 2008 he's been working on the project Nanaue with Matteo Nahum. Between 2011 and 2017 they published 8 singles (Rattsburg Records and Gutenberg Music) and 1 album (Nanaue/Gutenberg Music, 2013) plus 3 recordings for tribute albums of Italian prog label Mellow Records. In 2014 Emiliano moved to Brussels, Belgium where he re-published his seminal album “Small Engines” (2002, Rattsburg) and in 2018 he released “MONTY” (Rattsburg) which received great recognition from the art-rock, prog and jazz reviewers.

“Monty is a fascinating journey through the wild mind of a maverick.” - PROG magazine, UK

“Nothing is impossible for one who’s ready to go all the way and make a strange land his own...” - Dmitry M. Epstein, DMME Let it Rock, Canada

“The music rises, it takes us up, and from up there, it shows us how we can be satisfied when listening to – finally – a disruptive album” - (tr.) Enrico Storti, Asterischi di Musiche, Italy

Marco Machera is an Italian singer-songwriter. He likes to say: “I don't play music – I make it happen.” He released the debut-album “One Time, Somewhere” in 2012: the recording, a unique melting pot of pop and art rock, won early stamps of approval from the likes of Peter Gabriel bassist Tony Levin and ex-Genesis guitarist Steve Hackett, who praised its “interesting atmospheres and contrasting moods.” His second solo effort, “Dime Novels” (2014), is once again a uniquely fresh take on the pop song formula, and features incredible musicians Pat Mastelotto, Tony Levin, Markus Reuter, among others. A third solo record, “Small Music From Broken Windows,” was released in 2017: an intimate and reflective concept album inspired by “The Outsider,” a short story by H.P. Lovecraft. Since 2014, Marco has also been collaborating with American bassist Julie Slick (from the Adrian Belew Power Trio) and drummer Alessandro Inolti on the EchoTest project. In the ever-evolving and experimental worlds of modern progressive rock and avant garde jazz rock, their free-flowing improvisations and strongly melodic songwriting have combined to help them shape an unique identity and garner a growing reputation for their intriguing and surprising albums and their rare and captivating live shows alike.

“Along the way, Dime Novels finds Marco furiously pushing at the walls of musical convention. There are moments when the album sounds like prog, others when it sounds like an ambient fever dream, others still when it sounds like something that couldn’t be farther away from either construct. Dime Novels is as challenging as it is entertaining — and a huge leap forward for Machera.” - Nick DeRiso, Something Else Reviews, US

“[EchoTest] has just released its latest album, 'Daughter of Ocean,' whose nine songs form one vast movement of music that weaves thematic crescendos with ominous and dark undertones. The interplay of Slick and Machera is highly rhythmic throughout, often finding peaks in melodic moments like 'Sleep' and 'Tiger Races.' [...] the album is as enjoyable, wildly impressive, and unconventional as it gets.” - Jon D'Auria, Bass Magazine

To purchase “Emiliano Deferrari, Marco Machera”:
Available for download and streaming on all major digital stores from November 15th
https://show.co/5HhTWd9