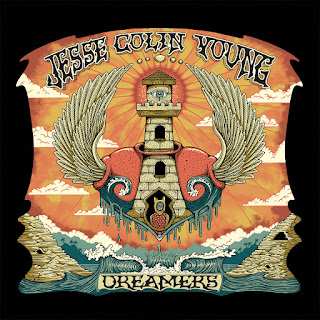 Before we take a deep dive into this record, I would just like to state that the album artwork on this one is great. It has a very traditional art style to it, and the winged heart instantly makes me think of the Bon Jovi logo. Young also has a nice looking website where you can not only buy his albums, but you can also pick up a pound of 100% Kona coffee. Rock music and Kona coffee? I’d say it’s the perfect equation for a morning on island time.

Now let’s talk about music. Dreamers is the kind of album that is good for listening to dockside, with a cold drink in hand. The songs range from folk-rock to blues-rock, to a 60’s rock. This album is definitely for people who like an older style of rock ‘n’ roll. “One More Time” gets the closest to that classic rock sound. From first listen, it has a similar beginning to Bon Jovi’s “Livin’ On A Prayer,” and so it comes full circle.

“Look Over Yonder” has more of a blues root to it. He has incorporated horns and keys into the song, which give it that classic blues sound. It reminds me of the Sonny Boy Williamson II song “Help Me.” Young’s rock vocals give an edgier sound to the otherwise soulful blues rooted song. We also hear this blues-tude in the song “Cruising At Sunset.” The undeniable walking blues bass line kicks in right after the intro. If I had to guess, I would say that “For Orlando” is a tribute to the horrific shooting that occurred at the PULSE nightclub in 2016. With lyrics like “How do we face disaster? Bitterness, what comes after” and “We need to love each other, every sister/brother,” it seems that Young is sending the message that we cannot let another tragedy, like the one that occurred in Orlando, happen ever again.

There are only a few things that I would have changed about the album. In the mixing process, the vocals could have been made clearer and brought forward as the main focus. I think the lyrics are a little difficult to understand, but to be fair, I don’t typically listen to this type of rock music for the lyrics. Some of the songs are kind of slow for being a rock song, and an increased tempo would have given the songs a better groove, in my opinion. A lot of the songs are four to five minutes long, which is pretty long for a standard song in the modern world of production. Lastly, I think the rock songs were stronger than the blues songs on the album, and I would have loved for Young to end with these instead.

There is a good variety of genres and topics covered on the album. If you like rock music, this album is probably going to be up your ally. Or if you are going out for a day on the lake, I would pick up Dreamers, and maybe a pound of coffee, for an enjoyable escape.