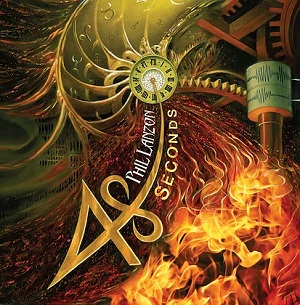 Phil Lanzon has quite the musical resume. He has been the rock steady keyboard player for Uriah Heep since 1986. Before that, he was in many other groups and has been playing the ivory keys since his childhood. Phil is also a very talented artist with his work displayed on his website.

48 Seconds is his second proper solo album. The eye-catching artwork on the album sleeves is an indicator of what the album’s title is about. The 1906 catastrophic earthquake in San Francisco took 3,000 lives in 48 Seconds! Hard to believe but true. This is how fragile our lives are. In the end, Mother Nature always makes the final decision, as it so appropriately says at the close of this terrific album.

The two-LP set comes housed in a gatefold format with two blue/green swirl 180-gram LPs. It looks mighty pretty spinning around on a turntable and oh yes, this music is great! I have been quite aware of Phil’s work since he joined Uriah Heep and very appreciative of the talents he brought to that legendary band. To have the opportunity to hear such a finely crafted and the well-presented solo album is the cherry on top of the mountain of ice cream. Speaking for myself, of course, I did not know what to expect and was very pleased with all four sides of vinyl presented.

As you can see by the list of contributors Mr. Lanzon had some help in making this project a success. His vocals and playing are incredibly strong and the support players elevate his efforts to a very high level of competency from start to finish.

48 Seconds is like a rock opera if you will that touches upon the past and present day. As the two intersect it makes you wish that there was a time machine you could step into to go back to a simpler time when all the computers, the internet, and cell phones did not exist. This point is well taken in the track “Face To Face.” The words hit home with lines like “Bring it back, real communication.” Instead of a nation of zombies in front of a screen we can once again become a communicating society, in person, not in real-time on the laptop or streaming, just being present in the physical world with all those digital distractions non-existent, even if it’s only for an hour, 10 minutes, a few minutes! Our humanity could be realized again and we can stop living in a George Orwell novel. This is one song of many that I enjoyed.

“Rock n Roll Children” was my pick to add to The Final on Vinyl Spotify Playlist. The combination of rock, pop, and prog in these songs are irresistibly driven with strong rhythm and a no-nonsense rock approach. “Blue Mountain” and “You Can Make A Living” were a few others that hit my sweet spot for straight-ahead toe-tapping rock that I would want to hear more than once.

48 Seconds is the portrait of a veteran rock musician spreading his wings and using all the tools at his disposal to create a great recording that any fan of rock music would genuinely appreciate. Having great artwork never hurts and putting it out on colorful collectible vinyl is the last thing that closes the deal for this listener.

Phil Lanzon has released a superb story set to music that is yet one more feather in a cap that is starting to look like a full headdress. 48 Seconds is a testament to history, music, and one talented focused man that was ready to go in another direction and give it his all. It worked out very well Phil, and I look forward to hearing you more with Uriah Heep and your next solo adventure.

Review Provided By The Final on Vinyl