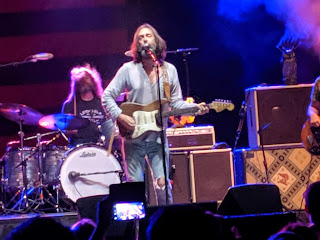 I often wondered what it would be like to sit in on all-day/all-night rock concert. I have been to my share of concerts over the years and saw as many as 4 bands performing short sets leading up to the headliner.  But to leave at 7 am, drive 3 hours and return home at 3 am is another matter. That is one long day. I found out that is was well worth it by the time it was all over.

The first band came on at noon, one of the three local warm-ups preceding Sass Jordan. The Jason Gisser Band was excellent and the lead singer, the namesake of the band, has one fantastic voice. He reminded me of Lenny Kravitz quite a bit actually, and as far as I am concerned that is a good thing! After that set The Playback kept things going with their energized alternative rock with a punk edge then Big Guns came on to close out the warm-up sessions. They were very good as well and the lead singer was certainly a big gun himself, I thought of the first lead singer of Marillion, the gargantuan Fish. 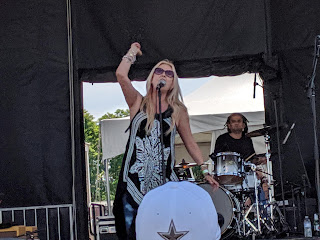 After the set breakdown and rebuild, Sass Jordan came on stage to kick it up a notch. The lady has been around for several years with many releases available however I never got into her music. After hearing her I am scratching my head as to why I never did. She is a great performer with just enough edge to her voice to compliment the super tight rockin’ band that supports her. After enjoying her entire set, I felt compelled to start looking into her back catalog.

Time was ticking away on this beautiful day. The threat of rain was there but the storm headed our way turned around and changed direction. The music gods were with us as the sky cleared into blue and the sun was blazing. After a few hours of that sun beating down on you, a break was necessary. And once again we were blessed with a reprieve as a cloud cover moved in and blocked out those rays. Mr. Sun would return much later in the day and provide us with a spectacular blend of colors over the mountains. 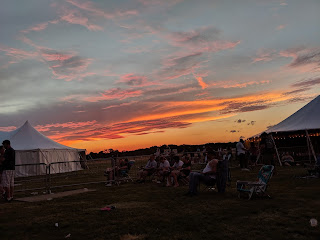 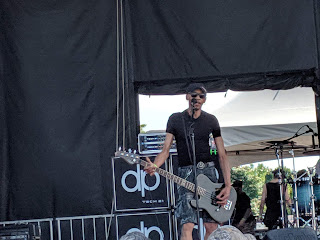 Next up was Doug Pinnick’s Kings X. His music is different and he has a distinct vocal style that takes a bit of getting used to if you are not familiar with the music. I am familiar and actually enjoy his vocal style. The music can be a very heavy prog metal to a rock-blues edge sound. One thing you can count on in the songs are some interesting time changes. All the guitar players out there would be hard-pressed to duplicate what is being produced. Pinnick’s long slender frame and extremely long arms allow him to carry his bass down to his knees. He plays it like a lead guitar. Kings X has a large catalog of music to check out and enjoy and the concert was a taste of what there is to offer the “progressive” listeners.

By this point, the audience began moving closer to the stage and it continued to grow but not to the point of pushing us out of our seats (lawn chairs). We were about 10ft back from the stage, a perfect range to capture all the sounds and vocals. I was told at the gate they sold 1,500 tickets but it sure did not look like that many people. The capacity is 5,000 so the response to this event was pretty pathetic. It supported women’s breast cancer and the artists that were on stage were fantastic, all of them. 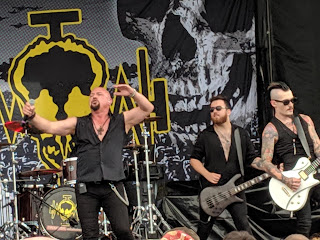 Now for one of the main events for many that came. Geoff Tate’s Operation: Mindcrime. Many people left after he performed which was a shame because there was more great music to come. Geoff was the voice of Queensryche and without him, they should not be bearing that name it’s as simple as that. Just my opinion on the matter. In any event, Geoff sounds fantastic and his command of the stage keeps your eyes glued right on him. He is not only singing he is playing the part of the main character in the story. The tour he and his excellent band are on this year is to celebrate the 30-year anniversary of that classic progressive metal album Operation: Mindcrime.

At one point during the performance, this beautiful blonde girl comes out on stage to sing with Geoff. I had no idea who she was. It was Geoff’s daughter Emily. She also was holding down the fort at the band’s merch table. Later on, I stopped by to say hello and asked her to make sure she told her dad that I thought that was the best Queensryche show I have ever seen. That was number 3 for me. I thought that would put a smile on his face.

Tate is as energetic and vibrant as ever and the band is tight and spot on. Basically, everything necessary to perform such a classic and musically difficult to perform recording. With twin guitars blazing away and a rhythm section that you can feel pounding right through your chest, it’s just what the doctor ordered for Mr. Tate to be in his best form. I took more pictures of that performance than any of the entire day and evening. In fact, I know CRB was the headliner but Geoff’s band could have easily been as well. No disrespect to CRB, they are fantastic, but as far as the level of musicianship and precision delivery, they are equals without question. 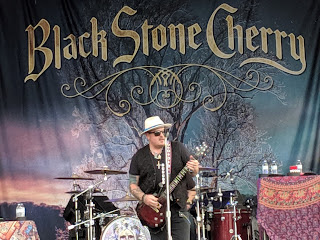 After that incredible performance, what more could a music lover ask for right? Well, how about the totally kick-ass Black Stone Cherry? Now here is a band that I knew of and I never pursued their music. After hearing their performance, I am totally hooked. They put on an amazing show and it rocked the house down. I went to the local vinyl LP vendor there and grabbed the only copy of their latest release Family Tree. I spoke to one of their fans on the way to the lovely porta-potties and he informed me that was their best album and they had just played 5 songs for us. I was sold!  Anyone that likes to rock would love this band I have no doubt. For those music fans that left early, which was foolish, you missed a band in its prime cranking it out.

Now after hearing all of that loud and raucous music, I think we were all ready for something different, some tunes with a warmer blues, funky rock sound. That would be provided by The Chris Robinson Brotherhood. I picked up their new release Servants of the Sun in limited edition colored vinyl. I have yet to give it a spin but I am sure it’s great. I will buy anything they put it without a second thought.

CRB has a distinct sound and their main man Chris has a vocal style that is instantly recognizable. There is not anyone that sounds like him. I saw them several years ago when they had their first album out and completely enjoyed the show. This evening would be no exception. They made their way through thirteen songs interweaving their own blend of southern rock, blues, and country. I always enjoyed the guitar playing which reminds me fondly of the Allman Brothers. Chris looked very happy on stage, smiling frequently. There is not a lot to say from this group, Chris thanks the audience after each song then launches right into another one. They are like a well-oiled machine on stage and in the studio. They will be winding up their tour and finally taking a well-deserved break.

What day, what a night. I will never forget the experience I had hearing all that music. It was a glorious day and I hope if they have this event again and more importantly, that the support will be much better.

Note: All the pictures were snapped by me with my Google Pixel2 Phone.
Posted by Keith "MuzikMan" Hannaleck at 7/03/2019