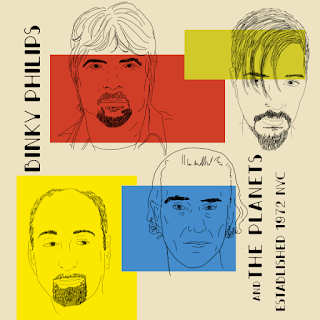 “The Planets played with a reckless joy that was the heart, soul, and spirit of their founder and creative light, Binky.” -  Paul Stanley, KISS

NYC – As amazing as it sounds, NYC rock legends Binky Philips & The Planets after 47 years will be releasing their debut album “Established 1972 NYC” on April 26th! David Fricke of Rolling Stone once described  the band as “the best rock & roll band I never saw or heard.”

The history of The Planets:

May 7th, 1972: Binky Philips names his just-formed band The Planets...

December 19th, 1972: The Planets debut opening for The New York Dolls at the Mercer Arts Center...

November 16th, 1977: The impending deal with Warner Brothers Records falls apart after six months of negotiations. Thus bestowing on The Planets in the heyday of the CBGB/Max’s Kansas City explosion of talent as… The Only Band That Didn’t Get Signed. In fact, The Planets, to this day, are minor legends for just that reason.

For all these years, Binky has kept The Planets together. Yes, there have been plenty of personnel changes over the decades, but, there has always been a band called The Planets playing somewhere in New York City since December, 1972.

After decades as The Planets, the band has had to change its name to Binky Philips & The Planets. Why? Well, there are over 25 other bands on the internet called The Planets nowadays. Binky's band had to make sure everyone found the REAL Planets when searching for their music.

Nowadays, Binky Philips & The Planets have a residency at the club, Arlene's Grocery, on the Lower East Side. The band has been playing there at least once a month for over three years and counting.

In August, 2017, The Planets started working with producer JZ Barrell on what improbably is their debut album after more than 45 years in the game. The ten tracks on the album are all written by Binky Philips between 2014 and 2017.

Says Binky, “Over many years, I have written about ten albums worth of songs. None of them ever got past the demo stage. Perhaps, rightly so. It's fitting that The Planets' first ever true full-blown-production album, 'Established 1972 NYC', is comprised of the best songs I have ever written. The brand of music we play could be called Unhyphenated Rock. It's straight up. It's hard. It's real. We are not Pop. We are not Metal. We are not Punk. We are not Retro. We are Rock & Roll.” 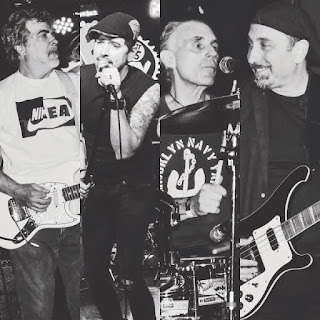 Binky also has written a book... “My Life In The Ghost Of Planets: The Story Of A CBGB Almost-Was.” Whoa, wait a minute, just who is this Binky guy? There once was a boy who simply had to make it as a rock star. He learned to play guitar, struggling with the uncooperative beast while everyone else basked in the summer's sun and threw various-sized balls at each other. This boy, Brooklyn Heights' Binky Philips, never relented. At the age of 16, he was ready to Form A Band. By the end of 1972, as the guitarist/songwriter for The Planets, Binky was sharing stages with The New York Dolls, KISS, The Ramones, Television, Blondie, et al. Our boy Bink was embedded in the heart of a pure organic moment of creativity and paradigm change as a regular performer at CBGB and Max's Kansas City. In “My Life In the Ghost of Planets,” Binky Philips recounts those days of raucous fun and furious heartbreak.

Says Binky, “The entire history of The Planets is in my book, 'My Life in the Ghost of Planets.' Besides my own story, the book covers the whole New York Rock Scene from the late 1960s to the late 1980s. It's a really fun read.”

Here's what's been said about The Planets and Binky's new book:

“Binky writes with the same infectious enthusiasm that drew me to him at The High School of Music and Art. We were the outcasts among outcasts. Ultimate fans in search of the ultimate dream; to be one with our heroes and share the glory, girls, and all the accoutrement that was to be reveled in as members of the Rock and Roll hierarchy. The Planets played with a reckless joy that was the heart, soul, and spirit of their founder and creative light, Binky. Almost too much of those qualities to ever stand the chance to survive and thrive. I'm thrilled that, in spite of what may never have quite happened for him, Binky remains a Fanboy at heart and still lights up at every memory tucked away in that file cabinet he calls his head.” -  Paul Stanley, KISS singer/songwriter/guitarist

“Binky Philips and The Planets were one of the star bands of the original CBGB scene. They were already around when early 70's rock transitioned from Glam Rock into the Punk movement. There was a lot more variety at CBGB than people might now be aware of. The Planets were a great example of the virtuoso-led school of music, just one of the ingredients that made a night out at CBGB an eclectic event. Binky’s story gives you a good view of what it was like to be in a band that was part of the inner-workings of the CBGB era.” - Tommy Ramone Erdelyi, Ramones drummer/producer

“The Planets were the best rock & roll band I never saw or heard. I know this because when I got to New York, just in time for the band's demise, everyone I met told me what I'd missed. I also know it because the tale told here, with wit, passion, and contagious hysteria, is the greatest busted-dream story I've ever read. It's so good it should come with a Planets album. If only there was one.” - David Fricke, Senior Editor, Rolling Stone

“Binky Philips writes in power chords; loud, snarling, thrilling blasts of memory that remind us why we love rock 'n' roll.  The story of The Planets is bittersweet, a classic tale of shoulda-beens who got fame and glory snatched from their grasp through bad luck and their own dumb choices.  It's also a revealing - and very funny - history of the New York rock scene from the '60s through the '80s and a testament to the author's command of language and storytelling. Binky may have fallen short in his tilting-at-Townshend-windmills quest for stardom, but there's no finer rock scribe alive today.  Period.” - Michael Simmons, Mojo, LA Weekly, Huffington Post, etc.

“In the astrology of New York bands, The Planets took on the ringing of Saturn, the throaty guitar sound of Mars, the eye-yi-yi of Jupiter's Io... the wild card of the asteroid belt. A grand band and one that deserves their place in history.” - Lenny Kaye, Patti Smith guitarist, writer, CBGB habitue

“I have great respect for Binky's ardor and dedication. The Planets would have been a great English Rock Band. Where they failed was in the area of Quirkiness. They were in the wrong venue (CBG') to capitalize on their considerable talents. That said, this was a fun read, particularly Binky’s pre-CBGB travails.” - Richard Lloyd, Television guitarist, solo artist

“Binky was, and is, the real deal when looking at NYC Underground Rock n Roll history. When The Planets hit the stage at Max's Kansas City in 1977, they delivered all the fire and promise of the mystic streets. They grabbed me by the front of my shirt and threw me into a life of Rock 'n' Roll. I am eternally grateful.” -  Thurston Moore, Sonic Youth and beyond...

To purchase Binky Philips book “My Life In The Ghost Of Planets: The Story Of A CBGB Almost-Was.”:
https://www.amazon.com/s?k=binky+philips&i=digital-text&ref=nb_sb_noss

Both CD & Book are available from iTunes.