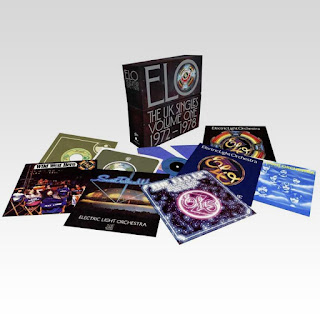 Electric Light Orchestra, better known as ELO for brevity purposes, has a large body of work dating back to the 70s. The first album I ever bought was Eldorado. I remember how different that album sounded the first time I heard it. At that time, I enjoyed it but not as much as I do now. With the passing of time, great music reaches a different level as heard through the ears of a more mature listener (like everything it is a matter of time).

Over the last few years, I have immersed myself in purchasing and listening to all kinds of vinyl, actually a lot of it is what I used to own and subsequently got rid of in my foolish youth.

So along comes The UK Singles Volume One 1972-1978 offering an opportunity to reminisce and hear all those big hits and tracks that were previously only available in the UK.

For this listener, it was a complete joy to hear all this music and watch it spin around on my turntable. That whole experience of having the vinyl to hold in your hand with the artwork for each individual 45, is what it is all about. The sound is incredible, vinyl has CDs beat by a long shot. The sound of vinyl is more natural and warmer - take away the digitizing, downloading and iTunes and what do you have? Not only something physical but music as it was meant to be heard. This was remastered from the analog source tapes. That fact should get audiophiles salivating.

Jeff Lynn has been and always will be the main cog in the wheel that keeps ELO rolling along. In fact, they are going on tour for the first time in 30 years as Jeff Lynn’s ELO. The music stands on its own. Well put together packages like The U.K. Singles Volume One: 1972-1978 do not come around on a regular basis so it immediately becomes a treasure trove of delights for any vinyl junkie or ELO fan. Check off both boxes for me in regards to those two points.

The Beatles influence in the ELO cannon has always been obvious and their leader has always acknowledged that influence. For my ears, that works just fine as I love the Fab Four without question and I can spot their influence in anything I hear. Make no mistake about it, this band proved unequivocally that you could rock and add orchestra related instruments to the mix and it all would sound killer if done well. It goes without saying that Jeff and his band really had that formula down straight away. It has taken some years to really appreciate this music more as I mentioned earlier but you cannot deny the string of radio-friendly hits that were blaring out of the radio back in the 70s. I was there and heard it all which makes getting this set that much sweeter and more memorable.

Some of the highlights in a box set jammed with them were “538 Overture b/w First Movement (Jumping Biz) * (1972 – U.K. No. 9),” which reminded me fondly of the great instrumental from the 60s titled “Classical Gas.” There are some riffs in that track that sounded unmistakable as far as my ears were concerned. This is not unusual at all it just made me smile inside to feel that recognition so quickly.

“Can't Get It Out Of My Head b/w Illusions In G Major (1974)” features a great rocker on the B side “Illusions In G Major,” so don’t be fooled by the track titles that may imply you are going hear something complex and progressive, you may hear a flat-out rocker like this one.

On to the surprises I found in the set…All along I was thinking it was standard black vinyl. “Livin Thing” and “Mr. Blue Sky,” turn out to be that beautiful translucent blue vinyl. That was the icing on the cake for this collector/music freak.

When all is said and done The UK Singles Volume One 1972-1978 is a must-have for any ELO fan or music fan for that matter. So, snag it up and put under the tree this year for the music lover you know, that is if you can stand waiting that long to crack the seal and give it an ear yourself!