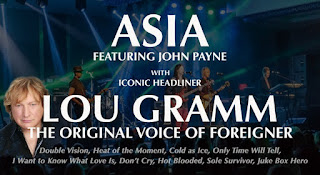 Performing classics such as “Feels Like The First Time,” “I Want to Know What Love Is,” “Heat of the Moment,” “Juke Box Hero,” “Only Time Will Tell,” “Cold As Ice,” “Sole Survivor” and more!

DEVGEL Productions announce that Lou Gramm and Asia Featuring John Payne have joined forces in an exciting 90 minute show featuring the hits of both FOREIGNER and ASIA.

Expect to hear classics such as “Feels Like The First Time,” “I Want to Know What Love Is,” “Heat of the Moment,” “Juke Box Hero,” “Only Time Will Tell,” “Cold As Ice,” “Sole Survivor” and more!

Dates to be announced shortly, with availability throughout 2018 – 2019.

LOU GRAMM
Is the original lead singer of Foreigner. Initially starting out as the drummer with the band Black Sheep, he joined Foreigner in 1976, and the band released their debut album in March of 1977.  Their self-titled debut sold more than four million copies in the United States alone. Foreigner became the first group since the Beatles to have their first eight continuous singles reach the Billboard Top 20, with hits such as “Cold as Ice” and “Long, Long Way from Home” taking the world of rock music by storm. Gramm has also enjoyed a successful solo career in-between hiatuses with Foreigner, with his 1987 debut “Ready or Not” further proving his versatility in the music industry. Lou Gramm was inducted into the Songwriters Hall of Fame in June of 2013, and continues to tour as Lou Gramm the Voice of Foreigner.

JOHN PAYNE
Is a British musician best known as the lead singer and bassist of the progressive rock group ASIA. The early 80s marked the start of a solo career as a rock/soul vocalist, with Payne releasing several heavily played radio singles. Shortly after, Payne was employed as a backing vocalist by Roger Daltrey of The Who on his solo albums. This lead to a series of work singing backing vocals for a variety of prestigious artists and composers. John then formed The Passion with keyboardist Andy Nye before being approached by Bev Bevan of ELO to reform the band after the departure of singer Jeff Lynne. This was short lived as he was later invited to join the supergroup ASIA, where he fronted the group from 1992 to 2006, releasing 10 albums and embarking on several world tours. After a brief hiatus, John formed the progressive rock band GPS before returning to the reformation of ASIA as the new ASIA Featuring John Payne, which tours to date. He is also currently involved with various stage projects, including co-creating, performing, and writing an award-winning Vegas musical. His latest endeavor is The Rock Pack, which he plans to tour for many years to come.