I attended a very special event that happened last evening right in our own backyard. The Bounti Fare Restaurant hosted a concert for the Berkshires Jazz Day Camp.

The camp was for five days hosted by Jacob Keplinger. The students came in from all over Berkshire County and there was a young man from Boston as well.

Each professional musician is also a teacher, in fact, some teach at several schools. The instructors included bassist Alex Blake, who started his career with Sun Ra; drummer Victor Jones, who has played with Chaka Khan; and pianist Charles Blenzig, who has played with Marcus Miller and Michael Brecker, Alex Foster, saxophonist, who has played with several artists over the years and has been a resident of the Saturday Night Live band for 28 years and most importantly, North Adams native Richard Boulger, the originator of the camp, plays trumpet, and got his start with Freddie Hubbard.

Richard Boulger was instrumental in conceiving and implementing the camp. He teaches in the public-school system in New York City in the Brownsville section a socio-economically depressed part of the city.  Notwithstanding the same young jazz students come out of his program and go on to the jazz program at Lincoln Center under Winton Marsalis then from any other school in the city.

This was an unexpected treat for everyone in attendance. It all happened because of few key people that include of course Richard Boulger, William Kolis, Mike Mach, Jacob Keplinger, and important contributions from folks like Edmund St. John.  Kolis and St. John are lovers of the arts and have been major supporters of live music in the Berkshires. Kolis was involved with Nashville in the Berkshires Music Festival for two years and I have seen Edmund at many live concerts over the years that I was covering.

It is nice to see influential and affluent people giving back to the community and more importantly to the arts and our children. A big thanks goes out to all those gentlemen that had a hand in making this event happen. Also sponsors such as Berkshire Bank, Ellen and David Clarkson and the St. John's helped to make this event a reality. 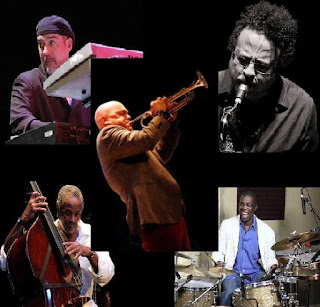 The young folks in High School that are musicians had an opportunity to work with these professionals and learn how to play music without any notes, music sheets, iPads or anything, just open-ended jamming. Although it was for only three days these talented young people put on one great show. All the horns, bass, keyboards, vibes and drums all came together and the pros added their own flavor to the mix. This was a very unique form of entertainment and quite enjoyable. I felt I was witnessing something very special, it felt that way all night. I have to give the nod to all of these wonderful teachers that showed these youngsters what they were capable of creating. It’s a beautiful thing and even more impressive to unfold before your eyes.

My nephew is Bryan Brophy, he plays the keyboards. If it wasn’t for him I would not have found out about the event. We are of course very proud of his accomplishments as are all the other parents there in attendance.

One of the things that made the evening so special was the fact that it was so up close and personal. The pros there were very helpful in explaining how things developed during the camp with all the young musicians. Additionally, they spoke with the parents of the children whenever they could, offering encouragement and letting them know of the potential these amazing kids have.

One thing I learned from Charles Blenzig and Alex Foster was that there are many fine music schools and parents don’t have to pay upwards of 50k for exclusive schools like Berkley. That was an eye-opener for a lot of folks there looking for direction to get their children in to keep them developing all their talents.

There were some performances by the pros that were excellent. This segment of the show was an interesting contrast to all the kids joining in. I have provided a short clip of bassist Alex Blake showing how one instrument can entertain an entire audience.

The Jazz Day Camp of the Berkshires and last night’s concert was a fantastic success and I hope the community continues to support this kind of event more often. It’s all about supporting music programs in our schools and encouraging today’s generation to carry on and be able to become teachers themselves one day. What better way to give back than to mentor an upcoming musician? This is what it’s all about.

Note: This is by no means a professional video, I took it with my phone just to get a snippet of a bass solo by one of the pros at the concert that evening-KH