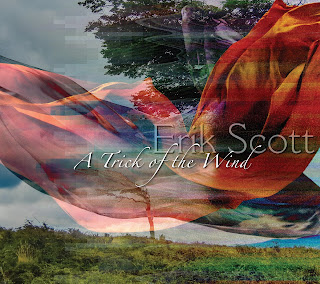 Erik Scott is an incredibly talented bass player. He is true to his art form in so many ways. He continues with his string of solo releases with A Trick of the Wind.

Previously I had the distinct pleasure of covering Spirits (2014) and In The Company of Clouds (2016). On A Trick of the Wind I heard a similar mix of new age, world and jazz, which I absolutely love. The mixture is superb and Erik’s bass playing is outstanding as usual.

To put it into the most logical terms, I think Erik ranks up there with Michael Manring in the new age genre and on a larger scale, with Tony Levin. He has been around as long as those two marvelous players. That about says it all from my perspective.

The nine tracks encompassing this recording is indeed a prolific gathering of music. There is a constant flow of change and unpredictability, which I genuinely appreciate. I get bored very easily, especially with music that has no spark or change throughout it. This is never a problem with one of Erik’s albums.

“Ghost of Storyville” adds a little spice of jazz injections that is just enough to push it over the edge into a “worldly” sound. I do believe that taking any other instrument than the guitar or the keyboards as the lead instrument can be risqué at best. You had better be a complete master with whatever instrument you plan on introducing as the lead. There is no issue for Erik as the lead with his music. There is just enough ambiance and textures added with other instruments that allow him to keep bass in the forefront of the music. Not only that, he demands your attention and his sound is distinctly his own. This is where audiophiles and other musicians separate the men from the boys.

I found “The Invisible Wand” storybook enchanting. The addition of the female vocals keeping time and a rhythm made it that much more special. If the voice is right for the music it then becomes another instrument. In this instance, it most certainly applied.

I always have to give a nod to the artwork on the album. The cover is self-explanatory. The satin-like red cloth is “A Trick of the Wind.” Notice the way it looks like a ghost behind the text with Erik’s name and the title of the album? I got what it was saying quite quickly and my eyes were attracted to the cover immediately. That is a good thing, so good job with that part of the presentation Erik!

“Born Dreaming,” which is a great title in any case, is a fantastic representation of the music that Erik does the best. It is flowing, bright, attention-getting, and the beauty just abounds from start to finish. If I had to pick one song that says Erik loud and clear it is this one.

Every track is a slice of the artist and for me, it was like saying hello again to an old friend. Two years is too long to wait for your phenomenal music Erik! You bring all listeners a sense of spirit, strength and hope with your sounds. You may see another album of the year from ZMR with this one.