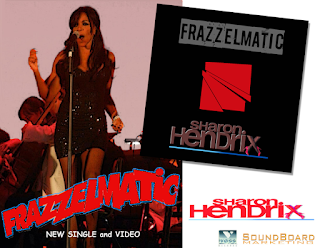 1n 1985 Sharon and Barry Manilow recorded the chart-topping duet, “Ain't Nothing Like the Real Thing” that appeared on his best-selling  “Manilow” album.  In 2010 they reunited for his residence at The Paris Hotel in Las Vegas and again in 2015 and 2016 she joined Manilow's “One Last Time!” farewell tour until the final performance at The O2 in London in June.

Now with the globe-trotting behind her the industrious Ms. Hendrix is planning her solo career launch and working with producer, Dan Voss Jr. creating new music for a future multi-genre album. That album will include some rock and pop, some blues and jazz and even a little bit of country as well her latest single, “FRAZZELMATIC” the retro-summertime fun track being introduced through a colorful and entertaining new video.

“FRAZZELMATIC” features a talented group of veteran musicians, a supporting band she plans to tour with this coming fall and winter. Sharon’s smooth vocal style slides in, out and over a contemporary beat spiced with exciting percussion, a classic horn section and a funky and infectious guitar groove. It's her homage to Top 40 radio, vinyl records and pop culture movie images reminiscent of a “Groovy, baby” time and place.

Sharon Hendrix began her career as “Muffy” Hendrix singing in the church and school choirs and by the time she reached her teens was part of The Young Americans, an international touring company of 30 singers from all across the United States. Over the next two years Sharon toured the Far East twice, performed on the legendary Ed Sullivan Show and the Kraft Music Hall and worked on various TV specials and commercials. Sharon earned a music scholarship to Chapman University and received her show business degree on the Las Vegas strip on the stage with iconic superstar entertainers including Debbie Reynolds and Sammy Davis, Jr.

When not working Sharon lives in southern California, she has three accomplished daughters and is a very proud grandmother. She maintains a rigorous daily work-out regimen that keeps her healthy and happy in mind and spirit and in the top condition demanded of adventurous, jet-setting entertainers and the seasoned veteran is not yet ready to stop.

Visit Sharon at: www.sharonhendrix.net and follow her on Facebook at Sharon Hendrix Music
Posted by Glass Onyon PR at 7/11/2016