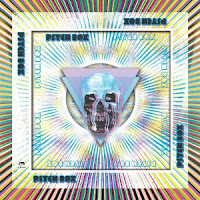 Psych Box is a 5 CD box set of treasures, and within the 77 tracks included, you can settle back to hear the old and the new and visit such areas as ambient, mellow kraut rock, indie and space rock.

Initially I was concerned as to how to approach such a review with the sprawling nature of the contents and the sheer number of bands/tracks, but as I have always been told, the best place to start is with the beginning, so off we go with Disc 1.

The opening disc of the Psych Box has 15 tracks and a running time of around 66 minutes. Highlights that I discovered as I relaxed and listened to the disc were, “Going To Hell” (2:58) by The Brian Jonestown Massacre, The Black Angels doing a version of The Doors song, “Soul Kitchen” (3:31) and “Damien” (6:19) by The Legendary Pink Dots. These three tracks are indeed the opening tracks to Disc 1 and with such luminaries as Hawkwind and Brainticket included in the remaining tracks, the question is, “What’s not to like?” As with all the discs in the set, brace yourself for the varied, the interesting and the very quirky.

Psych Box Disc 3 has a total of 15 tracks and a total playing time of around 66 minutes, and within those 66 minutes I found a few beauties. The opening track is “All Tomorrow’s Parties” (4:36) by Nico, The Fresh and Onlys do a superb rendition of “In The Light” (4:44) which is a probably better known from Led Zeppelin and an epic track from a band called Electric Moon, “Spaceman” (13:12), as well as a track I didn’t recognize from The MC5, “Gold.”

The fourth disc in the Psych Box set has again 16 tracks with a playing time just over 65 minutes. I really enjoyed the sitar-drenched “Dark Peace” (3:20) by The Striped Bananas, another Led Zeppelin cover by Indian Jewelry called “Kashmir” (4:54) and “No Way Out” (2:33) by The Chocolate Watchband. Also lurking within the 65 minutes you will find a track from Nektar and The Crazy World Of Arthur Brown, who are probably better remembered for the classic, “Fire.”

The final disc, Disc 5 in the Psych Box set has 15 tracks and is the shortest disc on offer, with a running time of just under 63 minutes. The amazing Iron Butterfly kicks off this disc with “Possession” (2:49) which is the original 7 inch version and a little bit shorter than the epic “In-a-gadda-da-vida.” Both Onyou with “National Strings Attached” (8:00) and The Lucid Experiment with “She’s My Melody” (3:37) are highlights I discovered among the other tracks. Throw in tracks by The Fuzztones, Nik Turner and the Raveonettes with their version of The Doors “The End” which does finish the disc and you have another collection of winning tracks.

At the outset I thought that it would be very difficult to properly review the Psych Box without writing pages and pages, but in the end it was surprisingly easy. A box set with 77 tracks, and very few examples that I did not enjoy (I only came across a couple) as well as a special price, says it all really. Over 5.5 hours of eclectic, interesting and, as I said earlier, quirky music justifies clearing a space on the CD shelving to house The Psych Box.