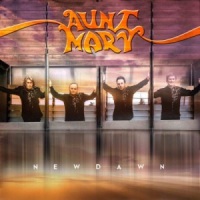 Aunt Mary, as a name, somehow suggests an “older” band and it came as no real surprise to find that they are a Norwegian prog band from the 70’s. The band were considered by many to be one of the best prog bands in Norway with their brand of music a mixture of heavy hard rock tunes plus clear indications of a more symphonic nature, although that only really showed itself on their 3rd, and last, studio album, Janus, in 1973. Last that is, until now, with the release of New Dawn. This would appear to be an apt title for a release which follows 24 years after an album of blues covers, released in 1992.

At their height, Aunt Mary were “up there” with the likes of Deep Purple, Ten Years After, King Crimson, Jethro Tull and many more. After the release of Janus in 1973, the band split up but did a few sporadic appearances, as well as releasing the blues covers album mentioned earlier.

3 years ago, the Norwegian guitar legend and producer, who was also a devoted Aunt Mary fan, Ronni Le Tekro, persuaded the original line-up of Aunt Mary back into the studio. This didn’t last long, and a spate of resignations for a variety of reasons, including health issues, would ultimately result in the band replacing 3 of the original members. The 3 years to the release of the album, New Dawn, was filled with periods of musical joy and profound grief, as 2 of the 3 originals to leave the band passed away. Now in 2016, we have the band made up of Bjorn Kristiansen (guitars), Bernt Bodal (bass), Glenn Lyse (vocals), Henning Ramseth/Ola Aanje (keyboards) and Ole Tom Torjussen (drums).

New Dawn is an 11 track album with a total playing time of around 42 minutes. All the tracks are relatively short with the 5:13 minute, track 8, “Blind Date,” being the longest on offer and the final track, “Don’t Keep Me Waiting,” being the shortest at 2:46 minutes.

The opening track, “Slave Parade” (3:49) takes no prisoners from the start, as it just grabs you by the ears and shouts “listen!” Heavy, thumping chords lead into a “chug-a-long” beat with the powerful voice of Glenn Lyse towering over everything. This is an opening track that ensures that you are awake for the 10 tracks that follow. It is very catchy and highlights the driving guitar of Bjorn Kristiansen.

Arriving next is a smoother melodic offering in the form of “Unconditional Love” (3:35), which is followed by “ Hopelessly Lost” (3:11), “Happily Ever After” (4:53) and “G Flat Road” (4:13) which in turn are riff laden, bluesy (with an amazing sampled sound ending) and then driving guitar with echo on the vocals.

“I Was Born To Ride On The Wrong Side” (3:16) reminds me, style-wise, of the Ramones, with the band thundering along, hardly taking time to breathe and the gutsy vocals gamely keeping pace with the band.
Next up is a gentler, acoustic based ballad which shows another side of Aunt Mary, “Open Your Eyes” (4:57), although Glenn does let his powerful voice “off the leash” as the song progresses. This is a standout track by virtue of being so different, and sits very comfortable in the middle section of this album.

The longest track, “Blind Date” (5:13) has a real air of confidence in its style and you could almost say that the track swaggers along. This is followed by another slight change to the more bluesy feel with “Been There, Done That” (3:07), which has a memorable, if short, harmonica passage. This is the blues done with some style.

The penultimate track, “Soldadero” (3:25) is an atmospheric, building track, which is very melodic with an orchestral tinge to it. There are points when the acoustic guitar hints at a Clint Eastwood Spaghetti Western style soundtrack. This is another track that exemplifies the breadth of the new Aunt Mary and leads into the album closer, “Don’t Keep Me Waiting” (2:46).

This last track is very different with light guitar riffs, stunning drumming and harmonious vocals. A short 2:46 minutes means that it enters, entertains and exits, forming a perfect ending to New Dawn.

New Dawn is an excellent album of rock and blues music, which I found extremely refreshing, although I think that it is fair to say they must have hung up their prog hats at the door of the studios. The range of styles across the tracks shows the skills of the band members and I hope that the traumatic events during the bands return to recording are soon replaced by the plaudits the new album should attract.

My very simple advice with New Dawn is to go out, buy it, play it, and I’m sure you will be humming bits of tracks as soon as it is finished, and at that point you should hit the play button again.

Key Tracks: Slave Parade, I Was Born To Ride On The Wrong Side, Been There Done That