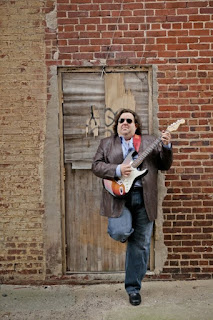 Born in Green Cove Springs FL, a city that has honored him with the key to the city and now residing in Macon GA, for whom he is the official music ambassador, Joey Stuckey is a power house of music talent. He has worked with icons from Alan Parsons to Ted Nugent and Joe Solo, producer of Macy Gray to Sammy Nestico, arranger of the Count Basie orchestra.

Last year saw him take on the UK where he toured and released his latest single “Blind Man Drivin'”.


The song and it's accompanying video was a runaway hit and became the official theme song for the Visually Impaired Musicians Lives Conference, held at the University College of London where Stuckey was also a keynote speaker and performer.

While in the UK, Joey also became friends with research teams from Queen Mary University of London and Goldsmith's University and has worked with them extensively to improve music technology for the blind. As a blind person, a studio owner, producer and professor of music technology at Mercer University, this was a roll Stuckey took on with ease.


2016 is already shaping up to be a land mark year as Joey prepares to release the full length album “Blind Man Drivin'” in early summer.

Says Stuckey, “Music is the thing that makes me know I am a live. It is my spiritual bread and butter and the best way I know to encourage and provide comfort and inspiration to others, while at the same time entertaining and sharing stories about who I am. When I first started making my own music it was a combination of southern rock sensibilities mixed with bands like The Smiths and The Cure, I used to think of myself as the Morrissey of Macon. I have played a lot of jazz and my jazz album 'Mixture' was number 9 on the top 40 CMJ jazz charts for 5 weeks back in 2013, but, the thing that really seems to enthrall my audiences is blues and that is now what I am focused upon.”

And no wonder that blues is what Stuckey fans want to hear! With his versatile voice that can whisper or shout with equal alacrity and his guitar playing that can make one note cry or explode like a super nova with seemingly a thousand notes a second, blues is Stuckey's true calling.

Get a free copy of the “Blind Man Driving” single at www.blind-man-drivin.com