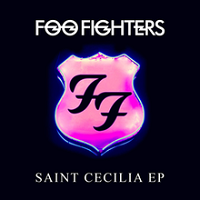 Taking their name from the mysterious aerial sighting during WWII, Foo Fighters formed in Seattle in 1994, following the break-up Nirvana.  David Grohl (vocals, guitar, drums) was joined by Pat Smear (guitar) and Nate Mendel (bass), with Taylor Hawkins (drums, percussions) and Chris Shiflett (guitar) rounding out the rest of the band.  More than twenty years and eight albums later, they are still going strong.  This is no more evidence than on their latest release, Saint Cecilia. Named after the patron saint of musicians and dedicated to the victims of the Paris terrorists attacks, Saint Cecilia is one extended play that will calm your fears about the state of modern music.

“Saint Cecilia” is a breezy rock song with a down-to-earth sound that is nothing short of a bona fide hit.  It has a great groove and is almost too infectious for its own good, but comes out on the right side of things.  With the type of lyrics that appear to be speaking directly to each listener, “Saint Cecilia” is one memorable and fantastic song that will stay in your head long after the final note ends.  “Sean” is short, punk-inspired song that does not fail to delight.  Its compactness works in its favor and will have you pressing the repeat button for another taste.

With plenty of punk rock flavor, “Savior Breath” comes out rocking and rolling with a fast and gritty sound.  It is a short, intense song that never lets up. “Savior Breath” sounds like it came out decades ago, but with the timeless quality that makes it a good song regardless of its release date.  After the three minute riot that was “Savior Breath,” “Iron Rooster” shows up to slow things down.  This change of pace is a calm, mediating song.  Though I like the lyrics, I think the song feels like it goes on for too long.  Sending things off in style is the “The Neverending Sigh,” with its towering sound riding a wave of thunder to the end.

Saint Cecilia by Foo Fighters is nice addition to their discography.  It is something that their fans will eat up and want second helpings from, while being a good introduction to their music for people new to the band.  If you are into alt rock or hard rock, then I think that it is a good bet to take a chance on Saint Cecilia.  It is one EP that packs more in it than some full length albums.