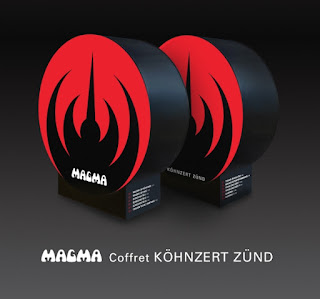 Paris, France - You have to see Magma live at least once in your life! For Magma, live performance is essential. Live performance allows – and forgives – no mistakes. You give your all, all at once. You are on a tightrope, with no safety net… It is too late for thought. The body, the hands and the instinct speak first; the fruit of reflection. This planned spontaneity, these raw sounds, this savage energy at concerts make live performance a wonderful experience.

Combining the energy of rock and the ecstasy of jazz, as well as numerous classical influences from Béla Bartók to Carl Orff to the Viennese school, brick by brick Magma has built a unique musical monument that is destined to be a worldwide beacon, as long recognized by their large and devoted following. As says Christian Vander, the group’s founder, inspiration and visionary: “Magma had to be created, if not by me, then by someone else”. During this series of releases, lasting over a year, Magma has been on the road, performing numerous concerts in France as well as other countries where they have a strong fan base: Canada, U.K, Germany, Scandinavia, United States, Japan and for the first time, China. Magma's new live 12-CD box set Konzert Zünd will be released on November 13, 2015.

Köhnzert Zünd puts together is a sumptuous box set, all the band's official live shows, recorded between 1975 and 2000. On top of which are two extra records made of excerpts from shows given between 2005 and 2011, as well as two unreleased records of the unforgettable 2009 concert given at the Alhambra in Paris.