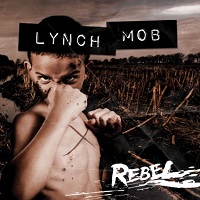 If you are not familiar with the hard rock band Lynch Mob, then it is time to get yourself acquainted. Formed in 1989 from the ashes of 80s metal band Dokken, Lynch Mob, after a few break-ups and numerous line-up changes, currently consists of George Lynch (guitar), Oni Logan (vocal), Jimmy D’Anda (drums), and Sean McNabb (bass). Rebel is their seventh album that show them to be in top form. The album features eleven songs of ripping and roaring hard rock that is sure to please fans and leaving wanting and waiting for more.

There is nothing like a great opener to jump start an album and “Automatic Fix” is such a song. Coming out like a lion’s roar, “Automatic Fix” is a great ode to rock music that is sure to have heads banging. Power and presence is something that makes for a great opener, and this one more than delivers. With an instrumental section that shines and soars, this song seems to have it all. The beginning of “Between Truth and A Lie” has a nice edge to it, but after that it is an average rock song. Nothing really stands out or leaves much of an impression, making for skippable filler.

Getting the album going back in the right direction, “Testify” thrills with its thundering opening. It is a slow and heavy rock song, whose methodical nature gives off an intense atmosphere. What is a rock album without a nice jolt of rage? Providing that rage is “Sanctuary,” a gritty, hard rocking tune dripping with social and political commentary, as the lyrics vent about the state of the modern world. “Pine Tree Avenue” is interesting song, with its funky groove and shifts in tempo. For many it might be one of those songs that takes a while to get into, because it has grown on me with each listen.

Another funky rock song, “Jelly Roll” is a place where the guitar really shines. The caustic opening of “Dirty Money” fits nicely with its politically charged lyrics. Though not quite as rage-filled as “Sanctuary,” “Dirty Money” has plenty of righteous anger for its targets. Announcing its presence with a booming opening, “The Hollow Queen” is an atmospheric song with a catchy chorus that demands to be shouted out at the top of your lungs.

“The Ledge” starts off with a slow, brooding opening that seamlessly morphs into a lighter, softer sound.  It is an emotional song that puts Logan’s vocals at center stage, where they truly steal the show here.

“Kingdom of Slaves” is one hard-hitting rock song, with controlled and commanding musical and vocal performances. Capping the album off is “War,” a fantastic song with sweet rhythm and flow that is dominated by a stunning and unpredictable guitar solo.

Lynch Mob’s Rebel is rock solid album. It stands as another testament to the dynamic duo of George Lynch and Oni Logan. Their chemistry is undeniable and it really shines through in their music. If you are looking for some quality hard rock, then Lynch Mob’s Rebel is just what the doctor ordered.