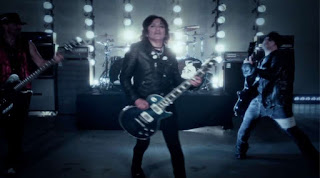 Hollywood, CA - Los Angeles hard-rockers BULLETBOYS have just wrapped up final touches on their brand new music video for the single “Rollover.” Taken from their latest album ELEFANTÈ (June 9th release, Deadline/Cleopatra Records) the song helped drive the album to reach the Top 10 in the Metal radio charts and has been a crowd-pleaser during the band’s summer 2015 tour.

The “Rollover” music video features voluptuous Playboy model Ivy Ferguson and plays off the dichotomous relationship between the artist who’s married to his music while simultaneously trying to keep his best gal happy. The sparks start to fly during the band’s live performance as the music and the tempestuous relationship reaches a fever pitch - all captured brilliantly by Director Diego Negrete.

CATCH THE BULLETBOYS LIVE :
The Bulletboys World Tour continues for the rest of fall 2015, as the band heads off to Europe next. New tour dates to be added soon!