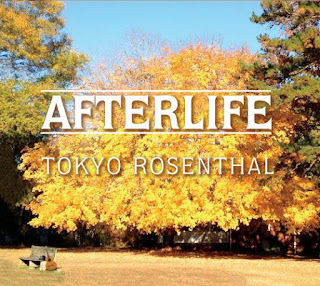 Chapel Hill, NC - Rock & Sock Records announced today that their recording artist, Tokyo Rosenthal, will be releasing his sixth studio album on their label on August 1, 2015. The new album is entitled "Afterlife". It's Rosenthal's first release in over two years and the disc contains 10 original compositions as well a new video for the single, "The Cold War".

The new tunes cover subjects as diverse as the Deep South, child loss, illness, burials, war options, and two of Toke's favorite performing venues. Joining Tokyo on this record are some of his regulars as well as some new contributors. Chris Stamey once again performs on bass as well as engineering the record and assisting in the production.  Andrea Connolly returns to help on vocals. David DiGiuseppe takes a larger role in this Tex Mex leaning album with his great accordion playing. "Toke" of course plays both lead and rhythm guitar, piano, and harmonica. He authored all songs as well as handling lead vocals on each track.

The new collaborators bring some diversity and new sounds not heard before on a Tokyo Rosenthal project. Recent Rosenthal tour partner, Jick Wins-Low, handles the drum chores as well as mandolin. Dobro makes it's Tokyo Rosenthal debut with the stellar picking and sliding of Dan Mahoney. Tom Ed White brings his viola to the party and Juanito Laguna lends his Mexican heritage to the album with his Charango. Rounding out the eclectic sound of "Afterlife" is Emily J. Farmer on French Horn.

"It was great to have the opportunity to record with such a variety of great players," said Rosenthal. "It allowed me to take chances and put out a very different sounding album. I missed being in the studio and after many months I'm quite pleased with the results. Also, I'd be remiss if I didn't mention the great job by Brian West who produced the video for "The Cold War". It really captured what I was trying to say on that track." The video of "The Cold War" can be seen here. The brilliant album design was made possible thanks to the  beautiful cover picture by Carrie Klein and on the back by Mike Green.

The album will be supported both by Domestic and Foreign touring. Most notable is an upcoming 3 week tour of Ireland, Scotland, and England in October. The album will be available through most sources including iTunes, CD Baby, Amazon, and Spotify.

For more information on "Afterlife" and Tokyo Rosenthal, contact Billy James at Glass Onyon PR (glassonyonpr@gmail.com) and log on to www.tokyorosenthal.com
Posted by Glass Onyon PR at 8/06/2015