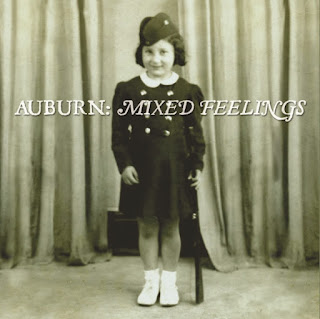 London, UK – Much to the excitement of music aficionados worldwide, UK acoustic ensemble Auburn is releasing a new album titled “Mixed Feelings” on September 11, 2015! Last year proved to be a hugely exciting year for the band, who reformed in 2011 after almost a decade apart. With a new album and a major UK tour supporting the legendary Jefferson Starship's 40th anniversary tour, Auburn has been captivating audiences around the country with their unique blend of Americana, blues and roots music.

Fronted by female vocalist Liz Lenten, who's voice has been described as “so sweet it'll make your hair curl” and “husky, with an emotional frailty”, who isn't afraid to show her full range of vocal tones or emotions. With varied influences from Bonnie Raitt, Billie Holiday, Ricki Lee Jones, Amy Winehouse, Kate Bush and Janis Joplin to name a few, Liz's songs grab you melodically, but also tell a story of love and life.

Says Liz about the band's forthcoming album, “It's been a funny old year! Lots of confusion and uncertainty in my life- which is really what 'mixed feelings' is about - love and hate (or at least anger - if not hate!) are very close emotions, and I wanted to explore them.”

Recorded in Nashville, Tennessee with award-winning producer Thomm Jutz (Nanci Griffiths, Mary Gauthier, Kim Richey) “Nashville” featured musicians who have played with everyone from Roy Orbison to Garth Brooks and Dolly Parton. Three tracks from the album were made available on ReverbNation prior to its release and within a few weeks had reached No.1 in the UK Americana charts and No.7 in the Global Americana charts. “Nashville” has gained extensive airplay and great reviews across Europe - notably Netherlands, Germany, Belgium, Sweden, Portugal and France.

Says Liz, “The songs were written over about 2 months, on my beloved vintage Martin guitar called Rosie (the one I 'stole' with a little persuasion, from my good friend and sound engineer Justin) and I was meant to go to Nashville in October last year to record them, but due to my son needing an operation (thankfully he's fine now), and my Mum becoming very ill, I had to cancel most of the last 6 months of 2014. So I went very early January, in the snow and ice, and we had a fantastic time recording the album. Thomm Jutz, the producer, and the rest of the musicians were as amazing as before, and we actually finished a day early! The whole album was recorded, and mixed in 6 days! It was so relaxed and easy - I just love the place, feel so at home in Nashville. I could live there easily!”

Here's what the press have raved about Auburn:

“Despite the harrowing subject of domestic abuse….Auburn succeeds through the quality of the song writing and in vocalist Liz Lenten’s delivery” – R2 Un-Herd Volume 51 May/June 2015

To get the year started with a bang, they played a few live dates, again supporting Jefferson Starship on their 2015 UK tour.

“Opening up the musical proceedings were 'Auburn', a British group led by Liz Lenten, they played a set consisting of country. blues and Americana which really hit the spot on a cold, miserable February evening. The set consisted of 6 tracks, spanning their 2 CD's ('Indian Summer' and more recently 'Nashville') and a couple of tracks lifted from their forthcoming album 'Mixed Feelings'which is due to land later in 2015. Liz's voice echoed the stars of the Nashville country musicscene and the stripped back band produced a balanced platform for her to launch herself, winning many hearts with this solid performance.” - EXETER PHEONIX – LIVE REVIEW FEB 2015 –WWW.MUSICMUSO.COM

In closing Liz has this to impart, “There is a lot of very blatant personal misery and hurt in the songs, including one about domestic violence and manslaughter (that one is actually a fictional story - I have yet to shoot anyone!) some of the songs were inspired by a close friend who was separating from her partner, after a very long relationship, although they do have some resonance for me too in terms of adjusting to new situations and dealing with uncertainty. I just hope the listener can find something in the songs that they can relate to - and most of all, enjoy the superb playing of the band on the record.”