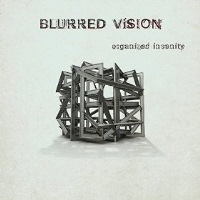 The Ancient One finds yet another new band, Blurred Vision, with their debut release, Organized Insanity, has landed on the review desk. The band have been backed/endorsed by one Roger Waters (yes, one of the founding members of Pink Floyd) which has brought them a fair bit of acclaim, which I have to admit has passed me by totally.

Blurred Vision is a 3 piece band comprising Sepp Osley (vocals, guitar), Sohl Osley (bass) and Ben Riley (drums), although there is a guest also listed on the album information, Joel Lightman (keyboards, vocals). The information from the record company suggests the band has a style that would be classed as prog/psych/pop rock, which seems to be a fairly wide grouping.

Organized Insanity is an 11 track album with a total playing time of around 48 minutes, with the title, and final, track “Organized Insanity” being the longest on offer at 5:30 minutes. At the other end of the scale, the shortest track is “All I Wanted” running on for just over 3 minutes (3:21).

The opening track on the album, “No More War” (4:02) is a slice of very pleasant guitar pop which starts with the voices chanting the title. The track continues with some very catchy guitar riffs behind the clear vocals provided by Sepp. Around the halfway point there are media messages about war behind the catchy themes. Latterly, the music drops away to give a melancholic trumpet passage, which then builds up to a recurrence of the opening them. The track leaves with a last chant of the title and has gone.

“Rollin On” (4:35) retains the immediacy of the opening track but is taken at a slightly slower pace. “Tonight” (3:40) is again a gentler tempo track with a simple acoustic guitar, piano and vocal starter. The track builds up to a higher tempo with some excellent drumming and a very powerful piano presence. This is one of the shorter tracks but it still is very quick to “get into your head.” “Long May You Run” (4:41) has a drum/organ intro with more of the crystal clear vocals. This is a very gentle track with some stunning electric guitar work around the halfway mark.

A return to the more up-tempo driving guitar style on “The Promise” (4:08) is immediately followed by another acoustic led anti-war song, “Dear John” (4:26), which although gentler in tempo has more of that superb lead guitar work. Track No 7, “Arms of our World” (4:26) sees the piano play a more prominent part in the intro. This is a very harmonious gentler track with some (synthesized?) strings which provide real depth to the track, and another of those shimmering guitar passages takes the track out.

“All I Wanted” (3:21) has a very familiar feel to it, with jangly guitars and a hook line that just gets you right away. Around the 2 minute point there is a wondrous keyboard passage that simply soars. “Wherever You Are” (3:48) is a step into the gentler piano/guitar arena again, although after the 1 minute mark the pace builds up and the track drives along.

“The Keeper” (5:11) has the sound of the countryside fading into a “killer” guitar passage. The vocals appear, but not in English, although it is the feel that sets the scene and the vocals revert to the norm after a few moments. Another tremendously catchy track with some of the little guitar riffs getting under your skin very quickly. Tempo changes and chunky guitar passages ensure your attention is always kept on the music.

The title track “Organized Insanity” (5:30) has a symphonic style start with an ascending scale into drums and guitar. The keyboards continue with a stunning theme before the vocals arrive with some excellent harmonies. Tempo changes keep your senses on the track as the music builds and ebbs and flows. There are some terrific chunky guitar riffs and keyboard/piano themes. Towards the end of the track, the lead guitar gets a chance to soar, and does exactly that.

This is an immensely enjoyable debut album by a new band, and I would go more for the psych/pop rock rather that prog as a descriptor of the music. Not a poor track on the album, with hooks here, there and everywhere mean that even on a single hearing, some tracks have embedded deep into your grey matter.

This release, Organized Insanity, should very quickly increase the fan base of this band. This is definitely worth a listen, or two, and although I normally suggest making up your own mind, I feel quite sure that there will be no disappointed listeners. Watch out for the name, Blurred Vision, becoming a much wider known name in music circles.

Tracks:
No More War
Rollin On
Tonight
Long May You Run
Promise
Dear John
Arms Of The World
All I Wanted
Wherever You Are
The Keeper
Organized Insanity
Jim “The Ancient One” Lawson-Sr. Reviewer Prog Rock Music Talk
July 22, 2015
Review Provided By Write A Music Review