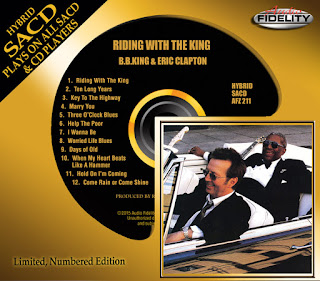 Camarillo, CA - In honor of the recent passing of blues guitar legend B.B. King, Marshall Blonstein's Audio Fidelity will be releasing B.B. King & Eric Clapton “Riding With The King” on Limited Hybrid SACD. This SACD should satisfy fans of King, Clapton and blues purists alike. “Riding With The King” was Eric Clapton's and B.B. King's first collaborative recording and it went on to win the 2000 Grammy Award for Best Traditional Blues Album. The album reached #1 on Billboard's Top Blues Albums.

They first performed together in 1967 when Clapton was 22 and a member of Cream. Clapton looked up to King and had always wanted to make an album with him. At the time of recording Clapton was 55 and King 74. Clapton arranged the session using many of his regular musicians, picked the songs, and co-produced with his partner Simon Climie. While this would appear to be a Clapton album recorded with King, Clapton gave King center-stage.

The set list includes lots of vintage King specialties, “Ten Long Years,” “Three O'Clock Blues,” “Days of Old,” “When My Heart Beats Like a Hammer,” as well as standards like “Hold On I'm Coming” and “Come Rain or Come Shine,” with some specially written and appropriate new material. King takes Clapton deeper into blues territory than he has ever gone alone and these two artists play the blues with conviction. There may never be another album that links the Delta Blues to modern rock with such style, grace, enthusiasm, and honesty.

Tracks
1 Riding With the King
2 Ten Long Years
3 Key to the Highway
4 Marry You
5 Three O'Clock Blues
6 Help the Poor
7 I Wanna Be
8 Worried Life Blues
9 Days of Old
10 When My Heart Beats Like a Hammer
11 Hold On, I'm Coming
12 Come Rain or Come Shine